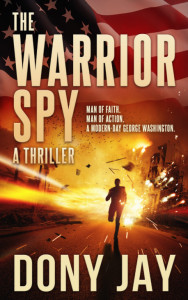 The CIA has a problem. Its best clandestine operatives keep turning up dead. And now, as if things couldn’t get any worse, a Defense Department scientist, specializing in high-energy lasers, has gone missing. America needs answers. And fast.

Delta Force operator Reagan Rainey, on temporary duty assignment with a secret CIA entity known as Directorate Twelve, is tasked to do just that—get answers. But to do so, he not only has to outwit and outmaneuver a dangerous cabal of foreign actors believed to be at the center of it all, he must contend with a deadly assassin who is bent on destroying him.

Relying on his bedrock faith in Almighty God, Rainey is forced to race against the clock to uncover what is really going on and why, before his beloved America is pushed to the brink of war.

The Warrior Spy is the first book in the Warrior Spy thriller series. It is jam-packed with heart-pounding action, all-out spy warfare and a new American hero [who] is sure to please.

It’s comparable to thrillers by such authors as Robert Ludlum, Brad Thor and Vince Flynn, while also containing a clear faith element. If you love for-God-and-country-type books, The Warrior Spy was written for you!