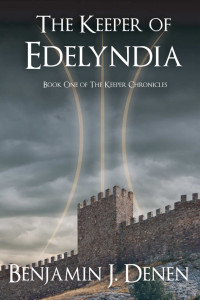 I have to admit a bit of guilt in enjoying an “angel becomes human” tale. I tend to despise such stories. Yet this one works. In fact, it gets stranger than that. The fantasy has the ring of truth though there is no savior and no Holy Spirit—no Messiah.

Of course, part of it is seeing the “evil church” get its comeuppance. This is a church that is glaringly evil—or is it? It has some evil people within it. But it also has some good people. Plus, many who are there just because that’s where the Maker is, right?

What makes this work?

God has a relationship with His people. He sends dreams and visions. He speaks to them, and answers prayer. It’s also because the guardian never becomes human. He learns, grows, and finds truth, but he never degenerates to fallen humanness.

The people, on the other hand, are very human with many issues, yet they learn faith. The bad guys are given every opportunity to repent and be saved, but they refuse.

So, Benjamin is a genuine storyteller. It’s a compelling fantasy which is very hard to put down. I read it in two quick goes. I think you’ll like it a lot. It does get violent, but not too gory.