In the aftermath of Lord of the Rings, released in the 50s and 60s, most fantasy has veered sharply toward the dark side. The Ferellonian King Series brings back some of the wondrous delight of LOTR with a strong movement toward the light. This is a heroic fantasy with heroes and heroines battling evil.  We have characters of strong moral character. The evil is depicted honestly and truthfully. We do not leave the good guys, or the readers, without hope. [The map for books 1 & 2 below is 1600 px wide]

Welcome to Ferellon! In our society attempting to redefine Truth [as if that were actually possible], spiritual reality has become a fantasy to most under sixty. The younger they are the more likely they are to not believe Truth. But that is the result of its rejection by the boomers and everyone in between. The civilization of Ferellon has much to teach us.

Though things seem strange, with different systems of measurement, weight, money, church and so on, you will find things are uniquely real. Magic seems available. But, in reality, these magical tools and powers come from spiritual sources. The spiritually ignorant are sadly powerless—though they seem to be in power. The Ferellonian King Series strips them of their self-centered blindness and hedonism. It’s a wild ride. 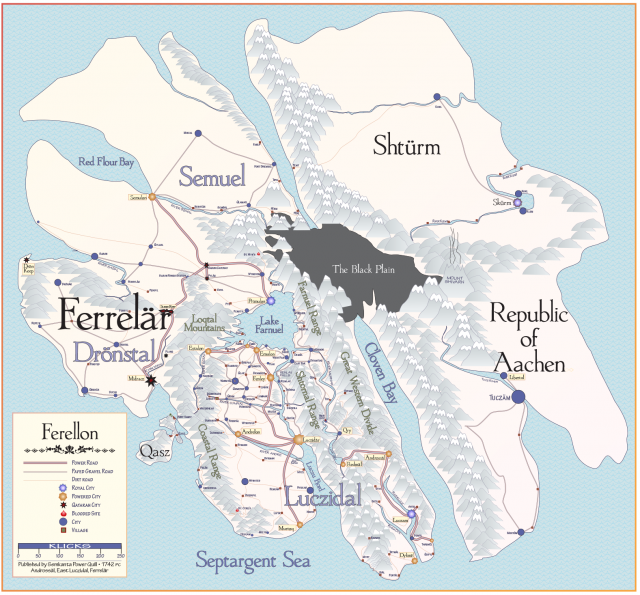 Ferrelär is ruled by Lemèr Fendrale, 43rd King of Ferrelär. King Lemèr is a sad excuse for a king. Witty, charming, distinguished in appearance—tall, with wavy white hair, rich brown eyes with crinkles of laughter at the corners—his ability to govern is sharply compromised by his desperate need to please everyone. As a result, he hears everyone and gives his counselors equal weight. Since most of his counsel is self-seeking, at best, Lemèr is perpetually confused.

Though the Assumption of Power was decreed by his father, King Leopèld, as a necessary conservation measure, its implementation was handled by Lemèr and his patchwork counsel. As a result, all effective power has gone to the Church and the three Lords of Ferrelär. What a recipe for disaster!?

The map of Ferellon, from the Ferellon Gazetteer with the changes up through Staff of Darkness, is available in a 24″ square poster, so you can see all the details.

The Ferellonian King Series begins in a completely untenable situation

The first two books reveal the inevitable result of the present situation in Ferrelär. Will the kingdom survive?

Book One: Staff of Light begins the reconstruction

This is the tale of King Heglin Roark, Primate of the Church, who almost effortlessly moves into kingship seemingly unopposed. His major mistake reveals itself in his intended elimination of the Known. The Known are a primarily underground group within the church who have much more direct access to power than the foolish Primate/King has any idea about. We begin to see the realities of spiritual warfare. In this world, the spiritual lords are Ansél and Qatar, but you’ll recognize them.

King Roark’s spiritual limitations are brought into sharp relief as the attacks from the ruler of the world [Qatar] begin in earnest. Led by Sir Rundolf Marloy, the most powerful warlock in the kingdom, King Lemèr’s son, Prince Cyril reclaims the throne for the Fendrale dynasty. Fool that he is, King Cyril believes he has access to the source of power. He’s sadly mistaken. 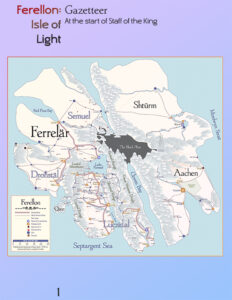 Free Ferellon Gazetteer PDF, for Staff of the King

This revised and updated Gazetteer includes information which was not known in Staff of Darkness, let alone Staff of Light.

Book Three: Staff of the King brings in Truth, Light, and Peace

The Lord of All has raised up a truly anointed Ferrelärian Queen, and His blessing on her reign transforms Ferrelär.

But there’s trouble in Aachen using Shtürmen thugs. Who’s doing that? What are his hidden plans? Whatever they are, they’re not good.

Political thuggery threatens the entire island. Who can fix that?

But the Lord has called forth an unlikely king, with no training or natural ability. What can go wrong with that? How can he help a country to which he’s never even visited? He doesn’t even know anyone there.

As usual, the Lord’s plans are simply marvelous.