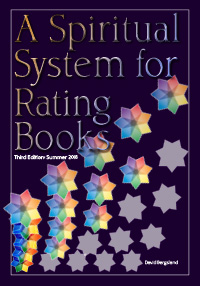 I cover all of this in theological detail in my book, A Spiritual System for Rating Books. But this Kindle version is from 2016, and it is not fleshed out as far as rating spiritual evil. The Third Edition from the summer of 2018 includes all five spiritual levels of evil. The PDF download is free and available in the sidebar of radiqx.com to the right. I’ve included a copy of the enemy spiritual levels at the end of this post.

This is not easy. Evil is spiritual—coming from or through evil beings. Evil is most commonly seen in sin. Sin simply exists unavoidably. People choose to be evil, but it starts with the enemy and his lies. Evil works with lies, fleshly desire, lust for power, and selfishness.

However, very few are aware of this basic spiritual truth. Normally, heathens are completely unaware of this level of evil. They do not recognize spiritual evil or believe it exists. If you tell them they’ll mock you or worse. This is true unless the person is involved with the occult. Even then that person might laugh at you to deflect attention from the truth.

Very few believe they are evil. This especially true in this day and age where it’s become common to see evil being called good. Most of the popular culture is evil, self-centered, avoiding even the thought of the Father.

BUT! How many of you saw the bald-faced lie in the first paragraph of this little section?

All of this makes it difficult to make a bad guy real and believable.

For we know that all he or she needs to do is repent and be filled with His Holy Spirit. How can I be afraid of any demon when all I need to do is command him to stop and leave in the name of Jesus? It takes constant prayer and an understanding of the battle as seen in Ephesians 6.

Put on the whole armor of God, that you may be able to stand against the wiles of the devil. For we are not contending against flesh and blood, but against the principalities, against the powers, against the world rulers of this present darkness, against the spiritual hosts of wickedness in the heavenly places. EPHESIANS 6:11 & 12 RSV

So-called evil people are a joke without the enemy to back them up. However, that same enemy can use them freely without hindrance, because how can these bad guys resist beings in which they don’t believe? Just remember the source of evil. 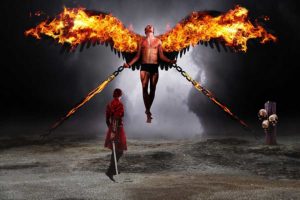 We need to talk about how this all plays out in our fiction. We have similar problems as we found in trying to rate the Christian level of a book. But we have noticed five distinct levels of spiritual evil in fiction. This is the focus of a lot of worldly entertainment, and much of so-called Christian fiction.

LEVEL ONE—the clean read: This is just as vapid as the Christian level one. There are good guys and bad guys, but there is no spiritual level at all. Making fictional evil real is not even possible. The entire spectrum of living may be in full display, but spirituality is simply not mentioned.

LEVEL TWO—false gods: it may be the Greek or Roman gods. There are temples and priests of these gods. They are capricious, fickle beings who may or may not interact with humans. Many now realize that these “gods” are probably the Nephilim or the fallen angels themselves.

There is a god for every purpose. It may just be idols like materialism, progressivism, patriotism, and almost all the other “ism”s. At best, these are works of the flesh. But a strong case can be made that capitalism and materialism are the modern variants of Mammon.

The true problem is that these ”gods” in reality are demons [or demon spawn] masquerading as “gods”. The Level Two books gloss right over that. Here also tends to be a lot of magic, fairies, elves, trolls, ogres, and the whole host of magical fantasy. Though there is nothing wrong with using these types of critter in your stories, care needs to be taken. At this level, making fictional evil real is almost impossible.  Most of them are evil, or non-spiritual—at best.

However, I’ve read excellent stories where elves [for example] are godly and know God. Sometimes, these magical creatures truly are spiritual beings on the side of the Lord, serving the Messiah. But often, it is mere religiosity. These false gods are horror fodder, but with no spiritual content, they are not very powerful or scary. If they can‘t drag you to Hell, all they can offer is transient, brutal pain. And that gets old very quickly. 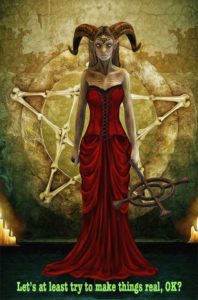 LEVEL THREE—the presence of evil: At this level, evil is there but not explained. There is really no way to deal with it, and there is often no moral code among the religious. People accept that some are evil. There is a lot of fear. There may well be religious attempts at controlling such evil. But it is just an accepted thing in society.

Some evil comes from outside of human society and seems to prey on humans. If this is coupled with a Level Three Christian book, there may well be exorcisms, the use of crosses, and so on. But there will be no real spiritual truth.

These are the battles of superheroes and super-villains. This warfare is often presented in a Hollywood, comic book, over-the-top style. OOF! BAM! Many books of the horror genre are found here (if they make it above level two). Without true spiritual power to combat evil, it really is terrifying. This is evil run amok with no way to stop it, except good thoughts.

LEVEL FOUR—demons: here we begin to actually see true spiritual evil. These demons are not often explained as fallen angels. Satan is not necessarily mentioned. They’re usually just Hollywood-nasty—which has little to do with reality. They are presented as brutal, ugly,
smelly, nauseating beings. They seem to be a real threat. Heathens are
terrified. As believers, not so much. Completely forgotten are concepts like, Lucifer was the most beautiful angel—before his rebellion.

Occasionally, books have some actual spiritual warfare on a realistic level with characters in a Level Four Christian book. Here making fictional evil real becomes possible, but that’s very rare. Normally, it is angels fighting demons with humans filling in the gaps supernaturally—often with weapons or objects of spiritual power. It’s never mentioned that a spirit-filled believer can simply deactivate any object like that. Jesus gave s authority over things like this. And don’t even. men tion that we are a higher level of being than an angel. They may be powerful. But we will judge them. However, angel/demon warfare is usually Level Three.

Some horror is found here. But warfare and the reactions of soldiers in this war are very different than the civilian horror found in level-three writing.

LEVEL FIVE—the battle of the mind and spirit: at this point, the spiritual battles are often internal to the characters. The enemy plays the kind of mind games many of us fight all the time. Doubt, fear, indifference, lethargy, depression can assail the heroes and heroines. Demonic possession and oppression are used to attack heathens and believers. The
Holy Spirit is deeply active in these battles.

The reality of the spiritual war in which we battle:

This level of in a book is extremely rare and takes a Level Five Christian character to pull it off. There is no horror here, for the foe is already defeated. All the believer has to do is tell the demons what to do in the name of Jesus—once their presence is recognized. Often the Holy Spirit has to reveal what is really going on so the believer will know what to fight.

Making fictional evil real shows the daily walk of the ones John calls “young men” in I John 2. Once you mature into eldership, this warfare becomes reflexive—and no big deal. The mature help train the young ones and protect the children. These books are powerful witnesses to the true walk of the Holy Spirit, and the reality of the Kingdom of God.

If you do not provide reality, the best you can hope for is powerless entertainment.