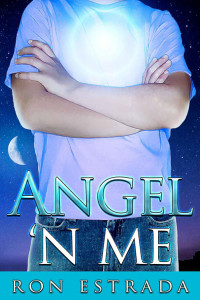 Once you get past the typo in the title, figuring out what it’s really saying, the hardest part is over. The cover is good. But the open single quote instead of the closed single quote/apostrophe hits me hard. Then I’m a typographer/font designer. So, give me a break.

This one takes a suspension of disbelief, but it’s not too hard. Once that’s over the book is really good. A nerdy freshman (Evan) ends up with the gorgeous senior head cheerleader (Angel) living inside his head. Normal teenage stuff ensues. However, Ron handles it very well.

The world is well-built

It takes place at the top of lower Michigan up next to Mackinac bridge. Evan is new to the school, which just started. He’s the complete outsider fallen into despair. He has no hope of being popular, having friends, or any of that. I can relate. I never did find any (well one guy).

I don’t want to spoil the story which is enjoyable throughout.

Spiritually, a three (I think)

In actual fact, it is closer to a a one, but it at least implies Christianity. The spiritual level is barely there. But it’s clean, fun, and non-offensive. So, I’ll give it to him. But it’s not even at a mainline level of religiosity.

Overall, I recommend it. I’d read Now I knew you (Cherry Hill series #1) first. here’s my review of that.