↓
Home→Author→Redemptive Fiction→Book Review: Hidden by Vanetta Chapman
Rating the book as a whole 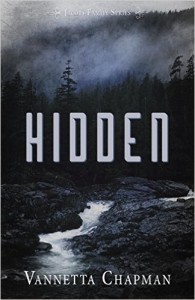 Hidden is Vanetta Chapman’s first self-published novel, and first romantic suspense novel. Her previous novels have either been Amish romance (the only romance sub-genre I don’t read) or Amish mysteries (I’ve read one and it was very good, except for the Amish thing).

As this is my first Redemptive Romance review, I’d better explain myself. I have a theological issue with any church or denomination which places the word of the priest or leader above the Bible, the Word of God, which I understand is Amish practice. I also have an issue with the fact the Amish apparently believe it is prideful to believe we have an assurance of salvation. And while I can sympathise with the idea of living a simple life, I also think there’s something wrong with limiting access to high school and further education—again, it’s the influence of man over the calling of God. No, I’m not a fan of Amish fiction.

But I love romantic suspense.

It combines the internal conflict of a developing romance with the external conflict of the suspense/thriller plot. In Hidden, Dana Jacobs manages the Taos office of the Department of Homeland Security. Her newest employee is Ben Marshall, an ex-Army explosives expert . . . which comes in handy when there’s a bomb scare at the local high school.

Ben senses an immediate connection with his new boss, a knowledge that God has brought him here for a reason. That alone makes this a step above most Christian romance—the acknowledgement that God guides His children. Ben also prays, something else that’s lacking in Christian fiction. Unfortunately, Dana pulls away every time he mentions his faith, and pulls away from any personal relationship as well.

This is a romance, so it’s no spoiler to say there’s a happy ever after ending. It’s Christian romance, so it shouldn’t be a spoiler to say Dana has to become a Christian by the end. So . . . there must be a conversion scene. On one hand, it’s well done, in that it fits in with the storyline (the primary concern of any novel), but it was a little weak from the theological perspective: it was more Dana realising God does exist and cares for her rather than actually turning her life over to him.

But even that places it head and shoulders above most Christian romance novels.

I definitely rate Hidden as 5 stars in terms of the plot, characters and writing—the plot is strong, original and scarily believable. The characters are excellent, and the writing is strong. The Christian content is also stronger than in most Christian romance novels (without being in-your-face preachy), but wouldn’t rate a 5.