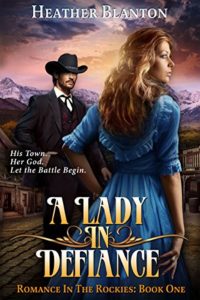 A Lady in Defiance is not your typical Christian fiction. It sounds as though it might be—three ladies settle in a lawless Colorado mining town. But this isn’t the genteel mining towns most Christian authors write about, where basically everyone is nice (except the evildoer), and the seedier parts of frontier life are kept to the side.

No, A Lady in Defiance is raw. Those seedier parts of life are front and centre, from the cynical mine and saloon owner with his “Garden of Flowers”, to the assumption by all the local men that Naomi and her sisters are the same as all the other women in town—for sale. It doesn’t get into specifics, but there’s no escaping the fact Defiance is completely uncivilised, largely because of the influence of Mr McIntyre (an unlikely Christian romance hero, and one I didn’t find entirely convincing).

But it’s also raw in terms of the writing. There are a lot of editing and proofreading errors, and I often found myself backtracking to work out who was speaking or which character was thinking—the speaking because there was insufficient paragraphing, and the thinking because all three sisters sounded the same. It made it difficult to get into the story when I kept having to stop reading to work out which character was which. I can only hope the author improves in later books (this was published in 2012).

It wasn’t that the all the writing needed work. There were some excellent lines, like this one—the prostitutes discussing men with one of the few honourable male characters. He says:

There are a few pearls among the swine. Nothing says you must choose the rule. Instead, find the exception.

The second half was much better than the first—perhaps because I’d finally worked out the characters and got into the story. And the second half also illustrated the other way in which A Lady in Defiance isn’t like a typical Christian romance novel:

A Lady in Defiance was unashamedly and overtly Christian, with a clear explanation of sin and a clear message of salvation. I was particularly impressed with Naomi in this respect, as was able to rise from her anger and grief and acknowledge the results make all their trials worthwhile. It is said that we can’t truly understand the miracle of salvation without having an understanding of the depravity of sin. A Lady in Defiance shines in this respect.

Overall, don’t let the slow first quarter and the writing issues stop you from reading an excellent story of man’s depravity and the glory of salvation through Jesus.

Thanks to the author for providing a free ebook for review.