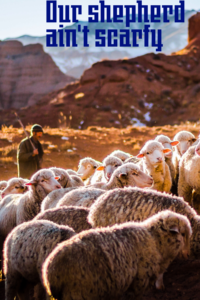 The normal Christian life centers on Hearing Messiah’s Voice. One of largest areas of damage during the Great Falling Away shows in the scarcity of teaching about hearing the Lord. In my reading today, I was stopped by the Lord in the beginning of John 10:

“But he who enters by the door is the shepherd of the sheep. To him the doorkeeper opens, and the sheep hear his voice. He calls his own sheep by name, and he leads them out. When he brings out his own sheep, he goes before them. And the sheep follow him, for they know his voice.”
‭‭John‬ ‭10:2-4‬ ‭MEV‬‬

Hearing Messiah’s Voice is not optional

Contrary to Joyce’s rant on The View, hearing the Lord defines the  Christian. It reveals sanity and the touch of reality upon the believer’s life. Hearing the Lord demonstrates the core of the walk in the Spirit. I’ve written books on the topic, The Wife of Jesus being one of the most recent.

We hear His voice and follow Him, learning to know Him as we walk with Him. We talk with the Lord in prayer. Because true prayer means dialogue…talking back and forth with the Messiah to whom we are betrothed. And! We’ve barely begun.

In Heaven, we’ll know as we are known. Sounds like telepathy and beyond to me.

Are you building that relationship?