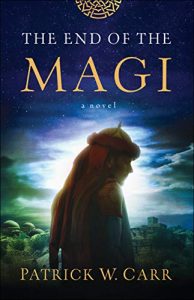 This season I was given a Patrick Carr Magi Tale to review, no strings. By its very nature, this is an extra-biblical story as there is virtually nothing in the scriptures themselves. That being said, entertainment reveals itself here. There is very little surprise if you understand Daniel’s position in the royal life of the Tigris-Euphrates valley.

The Magi are depicted fairly accurately, to my knowledge. It’s quite possible they were the remnant of the wise men trained by Daniel. It is also possible that they were counting the years. However, the count of the years matches up with Jesus’ death on the cross, not his birth. The depiction of the star I found much less believable.

The End of the Magi by Patrick Carr

THE BLURB: Following his vision of the coming Messiah, the prophet Daniel creates a select group of men who will count down the calendar to the arrival of Israel’s promised king. Centuries later, as the day nears, Myrad, a young magi acolyte, flees for his life when his adoptive father and others are put to death by a ruthless Parthian queen.

Having grabbed only a few possessions, Myrad escapes the city, and searching for a way to hide from the soldiers scouring the trade routes, he tries to join the caravan of the merchant Walagash. The merchant senses that Myrad is hiding secrets, but when the young man proves himself a valuable traveler, an epic journey filled with peril, close escapes, and dangerous battles begins.

With every day that passes, the calendar creeps closer to the coming Messiah. And over everything shines the dream of a star that Myrad can’t forget and the promise that the world will never be the same.

As usual, I find that Mr. Carr severely abuses his lead character with horrid, intense trials. He does this consistently in his books. At times this becomes quite depressing. However, the depiction remains so realistic that I can’t find fault. It just makes the book slightly unpleasant to read.

The story, by definition, remains pre-Messiah for the most part. Yet, as part of the Christmas narrative, it works fairly well. I did enjoy the read, but it’s hard to give it more than three stars due to the general darkness of the tale.

I’m grateful I was given the opportunity to read it by the publisher. I think most of you will be entertained and even enjoy the story. But it’s certainly not a life-changer.