I find myself in an interesting and vaguely depressing dilemma. A few days ago, two authors contacted me about beta reading or reviewing their books. Both books seemed interesting. This is a big event for me because the kind of books I like are very rare.
I am always looking for reality-based, near future, & truly Christian speculative fiction.
I consider myself blessed to find one or two of those per year. As I read 150 books a year or so, this makes fiction a parched and barren land for me.

This pair was exciting for me because one of the authors I know through a forum for Christian authors. The other contacted me out of the blue. There is no hint on his Website that he is a Christian. In his letter to me, he mentioned that people have compared him to Clive Cussler. I found that to be implausible, but intriguing. So I eagerly volunteered to read both of them.

I’m currently about halfway through the heathen book and I finished the Christian one a couple of days ago. Sad to say, the normal situation seems to be holding true for these two books. I may have to add a disclaimer to this post after I finish the non-Christian book [but I doubt it].

So far, the Christian book is far more raunchy, sin-ridden, and anti-Christian than the heathen book I would be appalled if it were not commonly the case—this is the norm these days. The Christian book has quite a bit of bad language, illicit sex among so-called believers, a large portion of the book deals with the bad Christian witness of the so-called believers [there is no good Christian witness], and not-believable Christian persecution by an employer [it’s irrational and arbitrary]. Something similar to what you see in the graffiti is spoken by one of the good guys in the Christian tale, and it’s implied that this is a reasonable statement. There is no good Christian witness and Jesus is not real to any of the characters. Jesus or the Holy Spirit are never mentioned. At best, the good guys are nominal believers. Their Christianity is demonstrated by the fact that they go to church, not by a relationship with the Lord. I would class them with those I called inoculated Christians—having just enough of the Gospel to make them immune to the real thing.

The heathen book is much cleaner with no bad language, good morals for the good guys, and the religion [if any] well hid.  Some of the good guys profess to be believers. This is glossed over with no Anti-Christian attacks. Some of the bad guys are obviously perverted so-called Christians of the white-supremacy type or worse [simply evil]. It will be interesting to see where the author goes with that. Most of these books, like Cussler’s, end up in the secular humanist camp, but this one has not—up to this point.

The heathen book is reality-based, whereas the Christian book is not

The Christian book ends up dealing with resisting an invasion from space, fought with the help of so-called Christian humans from space who are part of a large dispersion of believers into the universe in unspecified years past. I guess I need to ask for chapter and verse on that. There is certainly no Biblical hint of this being possible. In fact, it can be easily argued that it will not happen and has not happened. Read A Training Place for Mankind: God’s Creation explained for Normal Folk for my views on this subject.

The heathen book deals with a horrible attack on civilization by an as-yet-unknown technology. So it appears to be yet another humanist story where science has been perverted to nefarious uses. This may not be true, and this is the point where I may need to add a disclaimer after I finish the book. Though it is true that genuine Christianity is ignored, it is certainly not attacked, so far. In fact, I actually have hope that one of the good guys will turn out to be a true believer. That definitely never happened in the Christian novel.

Which one will I recommend?

Both stories are good, and I have enjoyed them. Which one will I recommend? Probably the heathen book. At least it is reality-based, and therefore a realistic possibility if the technology were true. The technology of the Christian book is also intriguing, but the world in which it exists is not.

Do you think my standards are too high? How do you deal with this dichotomy? In my reading experience this same state of affairs is true in romances, mysteries, end times books, and so on.

What do we call radical Christian fiction?

Conservative, fundamentalist, evangelical, and all similar terms currently bring up memories of preachy, poorly written books. ’tis a conundrum. Yes, I know we are dealing with fiction. But what I see regularly is fiction used by Christian authors to wallow non-Christian places and sin. That should not be.

Let me know what you think… 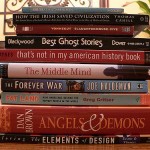