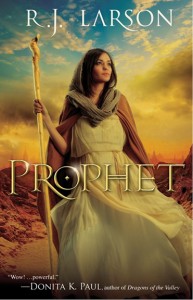 This is a good tale. It doesn’t help a reviewer when you move to a simple story of a prophet from two immense epics like the Chadash Chronicles and The Blood of Kings trilogy. But it does help me to discern the weaknesses of the story line better. There are two major issues here for me.

First: There is no savior here

This is the tale of a young girl called as a Jeremiah-style prophet. The calling and anointing she has is powerfully portrayed, but this book does not lead one to a better understanding of how to walk with the Lord Jesus. It’s about dealing with Almighty God the Father. Ela’s relationship with the Infinite is strongly personal, but it is not available to all—as it is in reality.

Second: The world is sketchily drawn

There’s no real world building here. The political system draws heavily off the Old Testament model of Kings called and anointed by a prophet like Samuel. There are few characters, but those written about are well developed even delightful at times.

I know that publishers like Bethany have a lot of overhead. But, it’s too bad that it’s beyond my budget to read the rest of the books in the series. I may buy them eventually, but there are too many indie books, which are just as good, waiting to be read for a much more reasonable price.