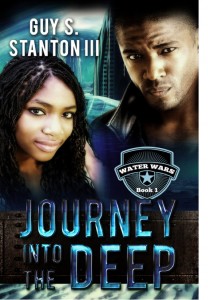 Journey Into The Deep, The Water Wars, Book #1

This one is yet another wonderful action/adventure, science fiction, fantasy, romance that I’ve come to love so much from Guy Stanton III. I’ve been enjoying Guy’s books so much that it took a while to realize what he has done. He has filled that need formerly filled by the heathen, evolutionist Clive Cussler, Jack de Brul, and the rest. It took a while to realize the differences and why they must be there. Series like these by Christians are much more difficult to pull off.

How does Christian Action/Adventure, Fantasy, Science Fiction, Romance differ from the heathen offerings?

In a couple of words, marriage and righteousness. For Clive Cussler, his heroes are good men [Dirk Pitt, Kurt Austin, Juan Cabrillo, Isaac Bell, and the rest—plus all their helpers] as far as works are concerned. They’re kind, gracious, strong, brilliant serial fornicators and heavy drinkers. It is easier to do action adventure with a hero who get the girl every book. The books fit the criteria for clean, but not for true, righteous, Godly men and women. Cussler’s heroes blow bad guys out of the water without much thought. Killing is no big deal to him or her. Lying is one of the tools of the trade. Stealing is done without thought or consequence. The religion is secular humanist at best and usually ignored, if possible.

There is a Christian reality to Guy’s books which is wonderful. Christian daily living is joyous, marked by faith events, and filled with spiritual power from the Lord