In this, book one of the Living on the Run series, we follow the blossoming of Ericca Archer and her brother, Riley, as they try to survive in a corner of the universe which wants to see them dead. Here’s the official blurb:

Orphaned at fourteen, Ericca Archer and Riley, her eleven-year-old brother, found the universe a hostile place. Sold into slavery, never in one place long, they learned to survive. But Errica’s dream of a peaceful world and a free life drives her to escape captivity. Now, she and he are freelance security agents for a team of scientists who need them to protect their plans and equipment. With part of that technology—plans to what may be the most dangerous weapon ever created—in the wrong hands, she must infiltrate the weapon itself and sabotage key components. To get the job done, Ericca must elude ship’s security and escape detection, even as the forces of several governments align against her. Coming out of this alive will require the help of her brother’s guns, and every bit of luck she’s never had. But there’s no choice. If she’s ever going to have a peaceful place to call home, she first has to keep the universe from blowing up. 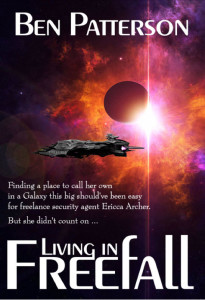 This book starts in the middle of the saga, and this is epic science fiction. This week Ben released a short story about Ericca and her life just before this story begins. This is a wonderful space opera written as what Hartwell and Cramer defined in 2006 as “colorful, dramatic, large-scale science fiction adventure, competently and sometimes beautifully written, usually focused on a sympathetic, heroic central character and plot action, and usually set in the relatively distant future, and in space or on other worlds, characteristically optimistic in tone. It often deals with war, piracy, military virtues, and very large-scale action, large stakes.”

The heroic character, Ericca, is wonderful and compelling. Her brother, Riley, is as well written, but he’s not a leader. But extraordinary people abound in this saga—both good and bad. Some are even evil.

The Confederacy has dedicated itself to killing the Trogs—those despicable people who have no fear of the Confederacy. The Confederacy’s only goal is power and domination. They have no consideration at all for anyone else. They rule by fear and ruthless violence.

The pirates are bad and nasty, but nearly a “Pirates of the Caribbean” group with kings, planets, and incredible wealth for the leadership. These are classic bad guys—raping, looting, and pillaging. As this book begins, Ericca and Riley have just escaped an evil pirate king—barely. Actually it’s more than barely, it’s miraculous—but we only see that in hindsight, well into the book.

Providence, the good empire, has degenerated into mere religion, for the most part. They are (or were) the immensely powerful good guys. They remind me a lot of a country I live in. They are technologically-driven with immensely powerful weapons of war to protect their exceeding hedonistic way of life. But we don’t hear too much about that.

The Raiders, occasionally known as Trogs,  are the real good guys. But no one knows much about them, where they come from, or where they’re hidden.

I had a hard time getting into it

First of all, I had no idea this was YA. All the teenage angst and nastiness got to me for a while. Plus, we are tossed into this part of the universe with no preparation and a huge amount of back story. But even with all these problems, the story of Ericca and Riley is irresistibly compelling. It rapidly became a book I could not put down. But I never could quite understand what was going on politically and governmentally. THEN I discovered that Books Two and Three are epic prequels…more on that in a bit.

The spiritual realities of this book are relatively hidden.

Ericca and Riley are immensely talented and capable children thrust into this conflict, just trying to stay alive. They have no faith except in themselves. They see themselves as alone in the universe in a near constant battle for survival, which they see as a lark and great fun. These are teenagers with weapons, spaceships, and technology which would enable them to conquer Earth with ease. The technology is wonderful fun. The people, good and bad, are written large and compelling. The battles are epic, for the salvation of mankind.

Dealing with the Living on the Run series

I originally found myself quite irritated because Ben chose to start the story in the middle, as it were. I talked with him about it a bit and his response to that question is, “DarkStar and Pierce are the prequels to Living. I wanted to capture the secular audience first before introducing them to Christ. Book four, not yet written, will be a redemption story that follows Living.”  Book 2, Darkstar Running, and Book 3, Pierce the Darkening Sky, are wonderful. Now I understand Ben’s reasoning and increasingly agree with it.

This is science fiction as I remember it when I couldn’t get enough of Heinlein, Asimov, Pohl, Clarke, Herbert, and Niven. I’ll never forget the wonder of Ringworld and Dune. These books are at that level. You can see it in Ben’s off-hand comment:

Christians tend to do things subpar. Our movies aren’t made as well, our books aren’t “covered” as well, our subject matter isn’t presented as well. That has to change. I read Game of Thrones, and Hunger Games simply to better my writing. I do not believe my writing, my ability to paint such clear word-pictures as they do is up to the crossbar they’ve set, and it needs to be. I believe, however, that with time and with proper feedback, that is attainable. I like that ebooks aren’t written in stone. The fact that they can be modified after their initial publishing should be a boon to out getting them where they need to be.

This is a great series, and I can’t wait for book 4. Ben’s humility is refreshing. I hate to break it to him, but his writing is already at that level. Hurry it up, Ben! I know you’re still editing and polishing these three—BUT I WANT BOOK FOUR!!!