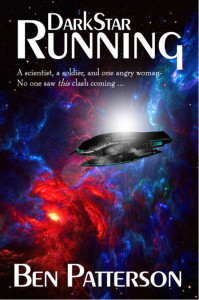 Now the series gets really fun.

We meet the Honorable Ancestors: Stan and Lilia Archer. Here’s the blurb:

“I’m a killer living on the run. I don’t remember every face of every victim, but I remember this: that look in the eyes of someone facing their end, the mixture of fear, resentment, resignation. It was my job, just my job. I stole lives. Now they steal my sleep, my peace of mind, my soul. The men, the women and, God help me, the children. I am a haunted man. This government asked too much from its soldiers. It asked too much from its citizens. It asks too much from me. Now, I’m asking for something. To get my soul back. There are as many ways to disappear as there are people, but no one could have predicted this. Fire up her engines. Let’s get DarkStar Running.”

Stan, the Confederation Enforcer, is a piece of work

He’s Stasi from an even nastier empire, the Confederacy. These Enforcers make the Cold War seem pretty calm and kind. Stan’s primary task is to kill all the Trogs. As we find out quite a bit later, these are the believers—persecuted Christians hated and killed by the Confederacy, expelled by Providence, Christians who have become hated or laughed at by all. Stan intends to do his part and wipe them out. But then he’s ordered to take out a cruise liner with thousands aboard…

Lilia is a waitress

She’s also a Trog, and Stan gets a little reality orientation. Stan grabs her and escapes with her as a hostage. But what a lady she is!

This is not as strange as it sounds. Many of our technological advances, like vulcanization, came to us through believers who were inspired—in spirito, in the Spirit. In fact, my father tried to chase this down many years ago. He found that virtually every great scientific or technological breakthrough came out of nowhere by inspiration.

In 20 years of teaching digital publishing at the college level with my own lab, we went through more than a hundred Mac computers, printers, presses, scanners and all the rest—and I never had to call tech support except for one computer where the power supply blew up the first month. Apple sent out a man to my lab and fixed it in house for free the next morning. Is this because Macs are great (have no idea really), or that God blessed the tools I needed to do what He called me to do?

In addition, upon many occasions I have been absolutely stymied about why the software would not work, was locked up, or whatever. I was the expert to call, so it was just me and the Lord. A simple request to the Lord fixed the problem miraculously—without a touch of the mouse or keyboard. Occasionally I had to break a hand of the enemy to free up the computer. Certainly after the mind, a CPU is child’s play or much less. So, what I am trying to say is that what the Lord does with DarkStar is certainly within the realm of possibility.

Spiritually, this book is strong mainline or better. It is not lowered to evangelical stereotypes. This is just lives of faith lived out before us within a excellent tale of the future.

This is science fiction at its best!

Wonderful concepts, outrageous technology, compelling characters, evil bad guys, and all the rest. You should read this book!