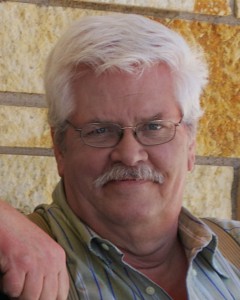 This blog contains the musings of a long-time artist, writer, & believer who’s been around far too long and knows less than he did forty years ago when he was sure he knew everything. He believes the Lord has called him to write, so he does it—trying to be obedient. Where it will lead is unknown except to the Lord Jesus. It is all Him—as I am finally convinced that what I do without the Lord is a waste of time at best.

As a hippie in the late 1960s, and a graduate of the University of Minnesota with a BFA in Printmaking in 1971, I have been an artist and designer since 1967 (as far as I can recall in that distant past).

I actually started my design career immediately working as an illustrator for an occult publisher in St. Paul. I also spent several wasted years as an ego-maniacal heathen fine artist until I found my true calling as a creative called by God to design and write. I didn’t meet the Lord until 1974, but that’s another story for another time. Anything beautiful and truthful I have done came from the Holy Spirit, by grace.

I began in West Virginia under an art director named Pik who is still an inspiration. The man could draw marker roughs that were accurate enough to spec type and take measurements—and draw them as fast as I can write. This is where I began falling in love with type and typography.

After three years freelancing in Albuquerque I became the art director for Albuquerque Printing, one of the largest commercial printers in the city. Here my love of typography really flourished with an immense library of press type and a top-notch graphic art copy camera.

After nearly 8 years as art director, I was given the opportunity to teach commercial printing at a large community college, Albuquerque TVI. I taught all aspects of printing from art to stripping, platemaking, printing, and bindery. It quickly developed into one of the first all digital printing/publishing degrees in the country with an all PDF workflow by 1993 or 4.

After four years of developing digital publishing course materials, Delmar Publishing, out of Thomson Learning now Cengage, asked me to write Printing in a Digital World. This was the first textbook on the all digital workflow [AFAIK]. I wrote six books for them on digital printing on acuity training for FreeHand, Illustrator, Photoshop, InDesign, and typography.

As a new owner of Fontographer, frustrated with the fonts available, I designed all the fonts used in Printing in a Digital World. First Makambo, then MyFonts asked to sell my fonts. Monotype began selling them on all of its sites a few years later. I’m now selling over a hundred fonts in several dozen families.

I started releasing my new unpublished course materials through Lulu in late 2002 or early 2003. Until then I had been distributing them to my students as PDFs. My publishing house, Radiqx Press, went full-time in 2009. I am currently writing font design books using FontLab and Fontographer, on-demand publishing books, books about using InDesign as the center of your writing & publishing work, and various Christian books—both fiction and non-fiction.