This book surprised me

From the cover I expected a little historical romance, and I don’t like them. It’s actually a very good fantasy with a compelling world and an excellent story. It provides a believable location for Mary to share profound truths with her readers. 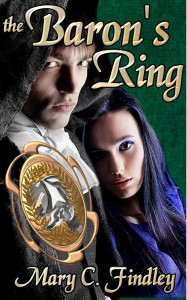 In Parangor the king rules from the capitol, Kenborana, in a limited monarchy checked by the Council of Justices. They can discipline or even remove a king. Royal family members wear a bronze ring with a silver badger in a gold wheatfield. It symbolizes industry, tenacity, and fruitfulness.

The Realmlands engage in trade and sometimes cooperate in political and military alliances. Three countries – Parangor, Tarraskida, and the South Crescentlands (of which Kolt’Kutan is the capital), figure in this book.

Tristan is the main character of the story, younger brother to Dunstan, heir to the throne. Dunstan forces Tristan to cover for his lack of learning through beatings and manipulation. He cannot do the job of being king without Tristan’s help. Tristan sees disaster for his kingdom under Dunstan’s reign. He also sees idolatry overtaking true worship in Dunstan’s attempt to create a River God Cult to consolidate his power. But Tristan’s lifelong conflict-avoidance has left him able only to pledge to work himself to death to try to soften Dunstan’s rule.

Following is a quote from the story explaining how isolated Larcondale, where a large part of the story takes place, is.

“Larcondale is part of Tarraskida, the country that’s Parangor’s southern neighbor,” Thomas explained as Tristan gazed around at the swelling mountains to the south and the dense forest to the north. The mountains trailed away east and west as far as he could see, lesser or greater. The forest, too, seemed to go on unendingly.

“This valley’s almost completely cut off from every other settlement by the forest, which is here called Kinran, and that mountain range, called the Neskiras. In the forest is a river – You called it the Brenget, I believe, and here we’ve named it the Lahina. It’s true that it’d probably be less than a hundred miles between here and Kenborana if you could travel in or along the river. As far as I know it’s utterly impassable and unnavigable. And since it doesn’t emerge from the forest for another hundred miles westward, where it dumps into the West Nilsan Sea, it isn’t used by anyone here as a means of transit to Parangor.

“If you wished to go to Parangor, you would probably head west perhaps a hundred and fifty miles. I’m told there’s a road that skirts the edge of the forest. In a month or two it should be relatively free of mud. But at that point you’ll discover that a large part of that region suffered a massive flood about two years ago. There were once productive salt mines out there, but the water filled the caverns and then spilled over the countryside. The place is a salt flat and wasteland and there’s hardly any way to pass through there now. If you were able to do so by the most direct route it’s perhaps another hundred miles to get to Parangor, and I honestly do not know how much farther to the capital city.”

“Three days before those people found me I was in Kenborana,” Tristan exclaimed.

“You came by a route no sane man would travel,” Thomas replied with a wry smile. “There’s no road to the river, the woods are thick, boggy, choked with briers. I’m sure you don’t need me to tell you this. You came through it.”

Lords have absolute power over their territories. Gregor, the Baron of Larcondale, provides rich tax revenues to the kingdom through his vineyards. Gregor takes what he wants – workers, land, resources, and gives nothing back. The clergy can have a good deal of power or none at all depending on the rulers’ whims. People with skills and training can make a living, often by barter. Apprentices become the virtual property of their masters.

People can be enslaved for debt but can work it off or gain the master’s favor. Vancus gains favor because of his skills in managing the vineyard and eventually wins his family’s freedom. Tristan runs a school to educate both sexes with the blessing of the local minister, since education takes place through the churches. Vancus’ wife, Josena, grew up in Parangor and received physician training.

But other Realmlands kingdoms are not so progressive about women’s education. Gregor’s new wife comes from the South Crescentlands, a people highly advanced technologically but governed by mysticism and occult practices. Women wear veils and have no rights or freedoms except by rare family indulgence or powerful marriages. The men are equally skilled in economics, warcraft, and engineering.

People have universal, sometimes superstitious, respect for nobility, even that of foreigners. Tristan loses his ring but is still capable of demonstrating the qualities the ring symbolizes and proving himself worthy of honor and respect. But he is only able to accomplish some of his work by convincing other nobles of who he really is.

Women commonly get power only through marriage. Mayra and Shneea are foils in the story. Both of them demonstrate, that a woman can have enormous influence, for good or evil, through a husband.

Rulers can demand that wrongdoers be extradited to face charges. Fickle nobles can change their minds about prosecuting wrongdoers but make it impossible for the accused to just go free. Tristan finds himself in a power play for the control of Parangor that becomes a deadly battle of wits.

Foreigners can come into positions of power, as both Tristan and Catarain do in the story. But someone calls Tristan’s identity, his loyalty, and his fitness to return to Parangor into question because he does not have his ring. He is accused of disloyalty and deceptions practiced against the whole kingdom. He must prove who he really is or lose the kingdom he never thought he wanted to win.