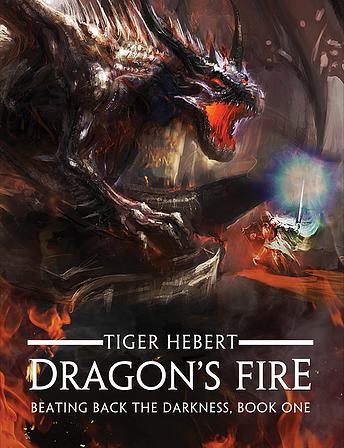 “It didn’t always feel like this. How? I can’t remember, but it wasn’t like this. No, not like this…it was cold and dank, and then there was the fear. To stand in his presence, in awe and reverence of his power, his might, it was intoxicating…but the fear never leaves.” Ekrin, High Priest of the Black Dragon.

A rising tide of violence is spreading across Darnisi, and it threatens to cast all of Aurion into war and chaos. A terror straight out of nightmares is at the heart of the corruption. Using the dark arts of seduction, the shadow drake bends and twists the will of those who would seek his power, to his own ends. Aurion’s remaining races forge unlikely alliances in order to survive the dragon’s scourge. As reality sets in, our survivors face a very grim future. Could their only hope of survival truly be found in the cryptic writings of ancient prophecy?

Do not let the fact that this is a debut novel from an unknown author prevent you from reading this novel. If I did not know that this was this author’s debut novel, I would have considered that I had read a well constructed novel from an experienced author!

The first thing that I noticed from Hebert is that this author has two things that stand out, a very vivid and deep imagination and a passion and love for his God. Both these unite and help form the basis of this well crafted novel. Hebert’s imagination shows itself firstly in the well developed world building where he describes the world of Aurion and its two main continents of Darnisi and Antirri. This forms a launching pad for Hebert’s description of the different species that populate this land, specifically that of the Darnisi continent in this novel. Here we are introduced to dwarves, orcs, elves, humans, centaurs, and minotaurs. Goblins are described briefly and are more of a side plot line. Rather than have these species being separate despite living on the same continent, he has created links  and connections via the history of Aurion and as the novel progresses, these connections become very important and contribute to strengthening and cohesiveness of the plot.

The characters in this novel are ones that you can become endeared to. They are many and varied, Hebert does not withhold from showing what makes them tick, and what their strengths and weaknesses are. All in all, well rounded and relational. I have many favourites and a fondness for most of them. Those that are portrayed as evil have evilness exude from their nature, especially Ekrin and Slayvin, those portrayed as good and honourable are just that, especially Dominar. Even those, such as Nikolai, who struggle with character traits of integrity and forgiveness, attract the reader’s empathy and support.

If there is a glue that binds everything together in this novel, it is the spiritual aspects. Hebert does not hide his love of the Gospel of the Lord Jesus Christ. This is where his love of Jesus shines through and reflects his personal relationship with Jesus. He has not hidden the biblical truths of forgiveness, salvation, repentance, God’s agape/unconditional love, biblical spiritual warfare. None of it comes across as preachy or condescending. I believe it would not be offensive to the any reader who may be struggling with their relationship with God, those who are seeking God or provocative to those that do not believe in God at all as it is not directed at this last group at all. Hebert has successfully woven these biblical themes/doctrines into the plot, its history, its prophecy, and essentiality to the life of all the species of Darnisi. It becomes the fabric of this novel. It is not out of place like it has been in some other fantasy novels; in Dragon’s Fire, it has its rightful place and fits extremely well. The culmination of this spiritual side to Dragon’s fire is when Hebert introduces the promised one, the Frelsarine, described in the prophecy of ancient texts as the mighty warrior king of God sent from heaven to bring light to the world of Aurion that is in darkness and under the grip of a new darkness. His name is Aneri’On. Hebert has portrayed Him as He is in the bible, Jesus, king, warrior, victor, saviour, healer, sacrificial lamb, redeemer, forgiver to name a few.

I was very emotional at Hebert’s portrayal of Jesus as Aneri’On, described above. Solely because it reinforced in me who He is, why I believe in Him, why I need Him and why I need to surrender daily to Him. This portrayal of Jesus and His interaction with the characters is one I will never forget. One of the things I expect from Christian fiction and have stated in the “Why Christian Fiction?” page in this review blog is that,

This novel ticks all these boxes for me.  Subsequently, Hebert has portrayed the nature of spiritual warfare as being true to the bible, with prayer being the main basis here and having a right relationship with God, surrendered to Him. He has portrayed the evil dragon, Slayvin, very convincingly, exuding evilness, with demonic enslavement to those he entices in his deception. This is also true to the nature and demonic deception that satan uses as described in bible. Hebert also describes through the character of Ekrin, Slayvin’s high priest, the desire for power, notoriety, and satiation of the selfish desires of our fallen, sinful nature at the cost of enslavement of their souls.

One aspect I thought clever on Hebert’s part was the use of exact phrases from the bible used in a different but also similar situation to that of the bible with the same meaning and importance retained. I chuckled at this when I realised what Hebert was doing. I look forward to more of this.

The fight scenes are very realistic and I felt that I was there fighting with all the various characters in their various fighting skills and weapons used. I do not know if Hebert has practiced writing fighting scenes and developing battle strategy but he has successfully portrayed these very convincingly. This is a highlight in this novel as the plot deals with physical and spiritual warfare so there are many instances necessary to have this executed successfully. Hebert does not disappoint. Most authors struggle writing fight scenes and most hate having to do write them. This does not seem to the case for Hebert.

With any fantasy novel, there needs to be successful world building to make the world of the novel believable, credible and realistic to the reader. Hebert does this very well by including,

From this, Hebert has added depth to this world building and has created the framework for further development of this world in future installments. I can see from the ending of Dragon’s Fire that the stage is set for exploration of a specific past history of Aurion and this just indicates that Hebert has further development of this world building he has started here. I am very much looking forward to this. Again, it shows the depth to his imagination.

I must mention of Hebert’s writing style. It is smooth, concise, no hiccups, I understood straight away what Hebert was describing. This definitely contributes to a well paced and fluid narrative overall. An important quality that defines a good writer is their ability to show and not tell. I have mentioned in previous reviews that showing engages the reader to what is being described while telling disengages the reader. None of the latter is found in Hebert’s writing. Great asset to have in a debut novel and writing expertise.

I have only one aspect of the novel that I struggled with. I have stated that Hebert is very proficient at writing/plotting fight scenes and he did this very well in the training he described between Isiirial and Seratu. I just felt that it went on for too long if he was using this to show the budding romance that was developing between the two of them. But despite this, it did not sabotage or derail the plot just slowed the flow and pace somewhat. Minor hiccup and not a major distraction.

I must also encourage future readers to read The Chronicles of Aurion before reading Dragon’s Fire. While these first three shorts do not show a direct link to this novel, they do show more of the depth of imagination and world building that forms the basis of this current instalment and provide some background history of the various species of beings in Dragon’s Fire.

This is one wonderful reading experience. Well crafted, refreshing, totally absorbing and very much escapism. I have  been edified with the presentation of the Gospel and adherence to biblical principles and doctrines without compromise. Very much entertained and encouraged.

I eagerly await the next instalment with great anticipation.