The Tyndale Code: (An Armour of God Thriller Book 1) 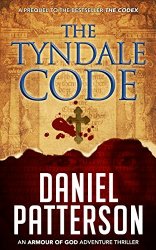 When covert artifact recovery specialist, Zack Cole is hired to retrieve a priceless sixteenth-century Bible, he unwittingly takes on the most dangerous mission of his life.

What seemed like a straightforward recovery job turns deadly when the holy text is the target of a bloody heist, and an innocent missionary is brutally murdered. Zack soon finds himself caught up in a centuries-old mystery, and his only clue is a cryptic code, believed to have been written by William Tyndale himself.

Wanted by the National Police and pursued by a merciless assassin, Zack races against time through the jungles of Guatemala to unlock the secrets of the Tyndale Code. A non-stop adventure is set in motion, intertwined with mystery, intrigue, and a conspiracy that stretches back to the time of King Henry VIII.

Can Zack recover the Bible and prove his innocence before it’s too late? Or will unlocking its secrets prove too formidable for even Zack Cole?

Join Zack Cole as he races across Central America to unravel the mysteries of the Tyndale Code by grabbing your copy now!

The first book in the bestselling Armour of God Thriller Series, the Tyndale Code will keep you on the edge-of-your-seat until the very last page.

This is the first book I have read from Daniel Patterson. A reviewer on Amazon states that this book is a good introduction to his writing and I would agree now having read TTC.

I am quite impressed with Patterson’s writing. It is specific, concise and is descriptive enough to enable the reader to be in the story. No stumbling blocks or having to interpret or decipher what the author is trying to say. I also loved the subtle examples of humour scattered throughout.

The length of this story is just long enough to do justice to the pace and events of this action packed, fast paced plot. Any less than this length and this novella would fall flat.

There is a lot to like in this novella. Zac is very likeable and relatable. I enjoyed the depiction of his struggle with his faith and relationship with God based on what happened to his parents. I can fully understand the doubt, anger, bitterness he feels towards God and I guess even blaming Him for not saving them. Despite this, I loved the way Zac is still perceptive to what Sister Grace has to say in encouraging him to let go of these emotions and give them to the very God he is aiming them at. It seems that he leaves it open for Zac’s spiritual journey to continue in the rest of the series, The Codex being the next novel in this.

I loved this sincere, truthful and gentle counsel that Sister Grace gives to Zac. It reinforces in me how any Christian needs to be when they are in a position to encourage and care-front someone with their doubts or negative emotions towards God as a response to life’s tragedies. I have a suspicion that what Daniel has included here as counsel for Zac is part of this author’s experience in real life, which for me adds credibility for him as an author, Sister Grace’s character and the biblical/spiritual theme of forgiveness and being reconciled to God. I also feel that Zac’s character is based on the author himself, or parts of him. I say this as Zac has the same passion for archeological/biblical artefacts that Patterson has for what he has poured into this story.

Sister Grace is one versatile character, devoted to God and her calling as a Nun, radical enough to wear hiking type boots under her habit, rescue Zac from the mafia type cartel who are after the bible, keep her cool after being shot during this rescue, and as mentioned, being quite a counsellor. Quite a character Sister Grace is.

And despite Frank Waterson being such a devious, street smart coward (well that is how he appears to me!), you have to love him and almost laugh at his antics!

I also found myself liking Ana, aka The Cobra. Despite being one hardened crime boss, she has a soft feminine side that she knows where and when to allow this to be exposed, not as a vulnerability, but as part of this crime boss persona. I honestly thought that Zac and her could have a romantic future!

For me, what attracted me to this novel is what Patterson has included about William Tyndale and his translation of the Bible. I can see from this novella that Patterson has a real passion for this topic and has researched it well, which has enabled him to pour this passion into the development of this novella, giving the entire novel, solid structure, consistent pace, mystery and intrigue, and suspense. I knew very little about Tyndale, his translation, and the political background before reading The Tyndale Code and this novel has now increased my curiosity about him and the obstacles that he faced and overcame in publishing the Bible into the English language for the first time. My respect for Tyndale has also increased from the information Patterson has included in this story. I absolutely loved the inclusion of the common verses from the Bible that are directly from this Tyndale’s translation. I found it disturbing that one reviewer has been very critical about this issue, that Patterson has attributed credit to Tyndale for these verses, but if this is the first English translation then would it not be a natural progression that this would happen? How is this insulting to the author of those particular books of the Bible that the verses belong to? We could say this for any of the other English translations that have been produced following Tyndale’s!

I loved the mystery and intrigue that surrounded the hidden code created by Tyndale that had sparked such graft and corruption surrounding the possession of this 1526 Tyndale Bible. Patterson is very adept at creating this environment and getting the reader hooked. Not sure how much truth and/or poetic licence Patterson has included here but he certainly is very persuasive in his creation of this part of the novel.

I would not say that this novel has strong Christian themes or focus as the main thrust is the search for the Tyndale Bible and deciphering its code, but I am glad that Patterson has included some biblical doctrines/themes in the subplot of Zac’s disillusionment with his faith and God from his parent’s death as I have mentioned above. I guess also that Patterson had a limit to what can be included in this story within the boundaries of what constitutes the length of a novella.

I must say that everything in this review is my opinion and has not been influenced by anything to do with the author, despite the fact that he has named one of the minor characters after myself.

The Tyndale Code has been a rewarding introduction to the writing, creativity and passion for the things of God that Patterson has and I look forward to experiencing this again in The Codex.