Don’t let the enigmatic nature of the covers or the 12 year old heroine in the first book deter you. These are seriously good novels. The basic plot is an old one: a group of persecuted Christians escapes Earth and flees to a remote barren, seemingly uninhabited planet.

This is serious, powerful Christian fiction

I don’t want to spoil this for you at all, so I’ll be purposely vague.

It is wonderful! This is one of the best planet and colony culture descriptions I’ve read in a while. It’s not geologically or scientifically in depth, yet it’s quite believable for a former scientist, like myself. While it doesn’t match the more comfortable, traditional scifi worlds found in Ben Patterson’s galaxy, it is shared in satisfying depth. It is understandable, the suspension of dis-belief was easy, and the aliens are spectacularly enjoyable. The colony culture is irritating, realistic, and compelling. The alien culture is one of the most detailed alien ways of thinking and interacting I’ve seen in a while. It is immensely fun.

In books 2 and 3, the additional alien cultures and the animal life are amazing. Through it all, the spiritual growth of the characters [as Rejoice grows up] and spiritual issues of the colonists and the aliens are realistic and compelling.

In the third book, the invaders provide a strong jolt of reality orientation to the entire world. I don’t want to say it is fun. But, it is realistic, believable, and often emotionally disturbing. The trials and joys of the colony mission are presented in an authentic manner, as far as I know. They deeply touched me, in any regard.

Spiritually, this is clear redemptive fiction 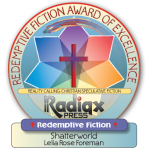 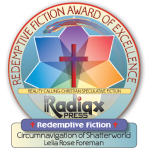 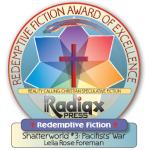 Yes, I gave all three of them individually, and as a series, Reality Calling’s Redemptive Fiction awards. The evangelical roots are showing. In my mind, these are novels for believing readers. I’m not sure non-believers will have the stomach for the blatantly Christian stance of the books. However, I am certainly praying that they do.

These are the stories of missionaries to a very foreign culture. They are realistically drawn, spiritually mature, and very complex. Many times during the reading of the books, I was made quite uncomfortable by the very realistic emotional reactions to the events of the books. But then, I’m not an emotional guy. I definitely assert that these spiritual growth struggles have the ring of Truth.

These are very good books!

Lelia, who I do not know, gave me both beta reader versions and final review copies in exchange for a hoped-for review. I am really glad I had the opportunity.