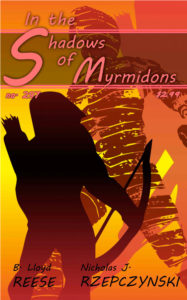 Authors love some words, that’s my only excuse for the title of this book. Myrmidons are people fanatically dedicated to a cause. I can see where the superheroes are Myrmidons of hope, justice, and good. The story shows them as evil spirits. The problem? The demons are winning and there’s no strategy against them other than heroic superhuman strength. Most of the time…

Spiritual reality is difficult in Myrmidons

It is probably true that only a demon could have the dedication to a cause on this level. That’s one of the worst aspects of evil. Well, there are also superheroes. The good news is that Jesus does not require that—He provides that for us. This story shows all of this fairly well.

The characters are complex—though the obvious unreality surrounding the very concept of superheroes makes this difficult. The world-building seems a bit over the top. But then I know that the worst parts of large cities are very bad. There is the sense of comic book fiction reality, but that’s not all bad.

Hopefully there is enough distance from reality so that readers can see the concepts raised and mull them over. 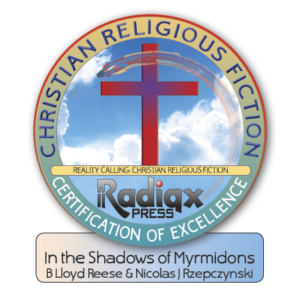 Spiritually, this is level three point five or so

The conversions are on a level four except for the fact that they are presented as almost magical. There’s no doubting the total transformation involved, but they still have that comic book reality. Overall, it’s spiritually satisfying even including all the quibbles mentioned.

As a result, I giving the book an award of excellence for Christian Religious fiction. I do think it’s a bit better than that. But that is for you, as a reader to determine. However, the underlying reality contains spiritual Truth.