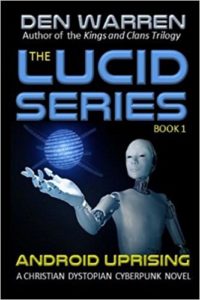 Android Uprising is a truly fun book of solidly Christian cyberpunk dystopian YA. Den has developed a wonderful series. I’m praying for the Lord to anoint it for the readers.
This is what I hope for with Christian fiction of this type–good entertainment, outrageous speculation, with a solid base of Truth. It’s very difficult to pull off, but Den has done it.

Yes, the anti-Christian haters are certainly going to bash it. Some will call it preachy. But it’s merely truthful in a world built far outside normal reality—having droids figure out the Truth logically demonstrates that step outside reality.
Here’s the blurb:

In a dystopian cyberpunk 2215, the former US was fragmented into multiple small countries. . . . People in the UN proxy state of Homeland are controlled by psychotropic drugs, corrupted education, propaganda and oppressive laws. In this story . . . . . . Computer hacking clones are trying to get rich no matter what they have to do. . . . A garbage collector hates everything about his life and goes rogue. . . . An entire strain of genetically-engineered children is to be culled because of an imperfection. . . . A tyrannical government robot unit is led by a ruthless being hiding behind a synthetic presence. . . . A clone couple is living off of the grid and expecting an illegal child. . . . A series of androids vow to fight for the truth even to the point of war. . . . And a boy asks, “Is God real?” The Lucid series is a unique clean-language novel that has heavy hitting, brutally honest edgy Christian themes and some graphic action. 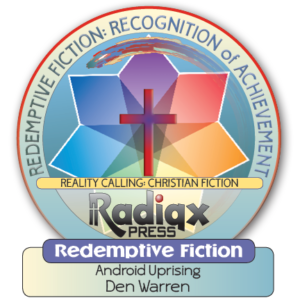 This type of book is always a bit over the top. The only thing to pull it down spiritually comes with the lack of spiritual enemies. They are mentioned, but not actually part of the story.

The Lucid androids present the Gospel well. It’s all entry-level evangelism and Christian living. My hope remains that Den will get more advanced Christian living in the rest of the series. But what is here earned Redemptive recognition.

Den gave me a review copy of the book with no strings, and I’m glad he did. If your teenager reads it, you can expect some very interesting questions and discussions. I recommend this entertaining read.