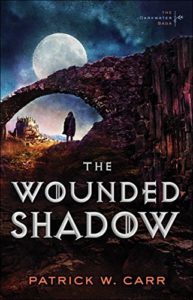 Feelings were mixed as I opened the review copy I received from Bethany House of Darkwater Saga 3 Patrick W Carr The Wounded Shadow. Bethany has been sliding away from the faith for quite a while. I was afraid that Carr would do what he did with the amazing Cast of Stones. It turns out I was wrong. The Darkwater Saga loses touch with Truth entirely. This tale wallows in entertaining worldly wisdom, at best. Christianity lies completely outside this wonderfully complex and detailed example of world-building.

With no expectation of edification, the Saga presents fantasy entertainment with little or no redeeming merit. Patrick shows excellent writing skills and an impressive imagination—receiving more accolades than he did with The Staff and The Sword series. I don’t question the accolades. Instead, I wonder how Bethany justified publishing it.

The kings and queens of the northern continent lay siege to the Darkwater Forest, desperate to contain its evil. But rumors of gold and aurium have lured deserters and the desperate into its shadow, creating a growing army held in its sway. Desperate after the death and dissolution of their greatest ally, Willet and the Vigil seek the truth of what lies at the heart of the evil they face. They delve the mind of an old enemy and find an answer far worse than they could have imagined.

Danger stalks the cities of the north, striking at the rulers of the kingdoms. As Willet and the rest of the Vigil seek to find answers, the group is scattered with an ever-growing darkness around them. Will they discover a path to keep their land safe, or will an ancient evil reclaim the world it once called its own?

Bottomline? I found I didn’t care much.