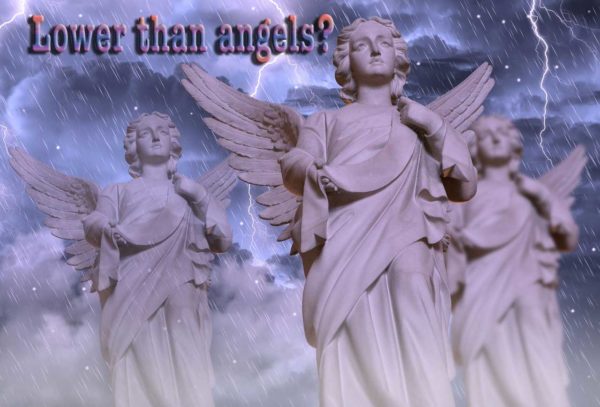 Like many revelations from God, this one started innocuously. Are we lower than angels, no we are not? Paul makes this very clear in I Corinthians 6:3a, “Do you not know that we shall judge angels?” NKJV. I was reading Psalm 8 and ran across the phrase, you have made him a little less than angels. But, there was a footnote in the KJV, which I looked at and the Hebrew states not angels, but Elohim. Elohim is the tripartite God who made man in His own image in Genesis.

Made lower than angels, no we were not

what is man that thou art mindful of him, and the son of man that thou dost care for him?
Yet thou hast made him little less than God [ed: Hebrew: elohim], and dost crown him with glory and honor.
Thou hast given him dominion over the works of thy hands;

Most just blow this off as a messianic reference to Jesus, or they chicken out completely and use the word angels. What the Holy Spirit showed me stopped me in my mental tracks. David, being a prophet among other things, showed us the truth.

We are created in the image of God. Less than God, but over the angels. When the Lord lives in us and we become what we are designed to be, we are much more powerful than angels. In the name of Jesus, we command demons—telling them what to do and where to go.

Mankind heads up the creation

We are in awe of angels, and rightly so. If they didn’t fall with Lucifer, they are amazing, powerful, righteous messengers and warriors. But in the hierarchy of creation, we stand at the top. Angels are part of creation and they serve us at the Lord’s pleasure and command.

Sin destroyed everything. But Jesus broke the power of sin and set us free. We will rule and reign with our husband, Jesus the Messiah. No angel will do that. Satan’s pretentions sound dominant. But he is just a liar and a fraud. God made us like Him. Nothing else in creation can say that.