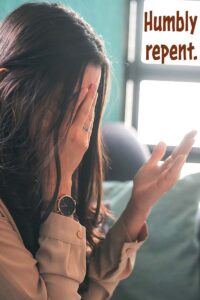 Never forget humble repentance for growth. I learned that one afresh this past week. In the last post I shared about receiving the anointing. It was, and is, the truth. However, this week I was caught in a need to repent.

It seems like I was so consumed with having something to write, that I forgot [or ignored] the simple fact that I had exhausted the last idea.  There were no more books in that well. The Lord was anointing me to write a book that was doomed from the start—because I insisted.

It all changed when I turned to the Lord and said, “Something’s wrong. Show me what it is so I can get it cleaned up and move in power again.” He did that, and I had to repent of writing a book while taking the easy way out.

It wasn’t that my idea was bad. The problem was I was still living in the world of the old series in my mind. I keep using those solutions to solve problems in the new book. But it was producing a boring story. I’d been there before.

So, I repented and asked the Lord to show me the world necessary for a new series. During the past week, I’ve built a non-existent university in a fictitious town. I’ve written the history and some of the back story into a new history and character document. Lo, and behold! It’s a lot of work. But it’s beginning to bear fruit in a new type of story for me.

It’s still in New Mexico, the land I love. But it’s a fresh look from a new angle. There’s still a lot to work out. But the work is flowing again. I’m beginning to see the possibilities. And, as usual, it all started with repentance.