↓
Home→Book Reviews→Reviews & commentary→Christian book review: The Blood of a God, Book #1 of the Nephilim Chronicles by Lance Burton 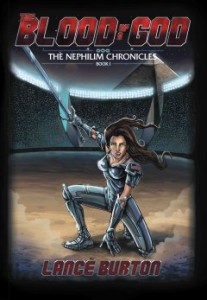 The year is 2047 and Earth’s fate hangs in the balance. Commander Tarakia Sol, a girl who has the power of a celestial coursing through her, leads a special team called Talon Squad in a battle to stop invaders from the Orion Constellation – invaders who are the descendants of an angel. Will all of her training and faith be enough to stop them? Where do these events place mankind’s existence in the universe? The answers are within…

This official description begins our journey

Here’s a quote from chapter one,

“…the final battle that determined the fate of humanity and all of Earth just took place and only I and a handful of fellow warriors know that the war is actually just beginning. I work from the shadows, sometimes barely ahead of the law, and constantly at war with the forces of darkness. And, just in case I don’t make it back alive I want everyone to know what really happened. I want everyone to know the truth of just how close we came to losing everything – and what still must be done.

It is yet another book using the brief, incomplete mentions in pre-flood Genesis: The Nephilim were on the earth in those days, and also afterward, when the sons of God came in to the daughters of men, and they bore children to them. Those were the mighty men who were of old, men of renown. [Genesis 6:4 NASB]

However, in this book, the “angels” gave up their immortality to become superhumans — the “reality” behind the Greek and Roman myths of the gods. These beings have immense power. Some of them even figured out that the Flood was coming and escaped into space with their incredible technology. They’re living in Orion and coming to conquer the Earth. If you’re still with me, the book moves on from those non-credible assumptions. Extra-biblical doesn’t begin to describe this spiritual mess.

The story is designed to present as many “popular” fleshly lusts as possible (gorgeous female warriors, hunky men, spec op warriors, martial arts, demonic power, telepathy, magic, aliens, amazing technology) within a story which is basically clean and acceptable to the CBA (Christian Booksellers Ass…). We have the incredibly gorgeous, impossible strong woman warrior, who was trained by a descendant of one of these angels-become-man who has repented and become one of the good guys. The formerly angelic, evil Nephilim are attacking Earth as aliens from the stars — roughly taking the place of some of the characters from Jesus’ Revelation to John. The action is fun, exciting, and toward the cartoonish comic book style a bit too much for my taste. I imagine many Christians reading the book will find it spiritually comfortable—but I don’t consider that a good thing.

The spiritual level is solidly evangelical

Of course, you need to get past all the extra-biblical speculations. The book is narrated, in a very chatty manner, by Tarakia the leader of the Talon squad who is the larger than life heroine. In the list of the characters before the story begins we are told that Tarakia is  the “Leader of Talon Squad and member of the Masarri Order. She inherited DNA containing elements of celestial-human hybridization granting her great benefits to strength, agility, and intelligence, as well as telepathic and empathic capability. Daughter of a former U.S. President.” She is a believer. In her narration she tends to plop down some of the standard evangelical doctrine. But it’s not overly preachy. She does tend to tell too much before it actually happens in the story. But that’s handled fairly well.

Once you accept the extra-biblical speculation for the purposes of the story, the tale moves fast. However, it does not show us a realistic relationship with our Savior—and the Holy Spirit is not mentioned anywhere in the text of the book. Most doctrinal boxes are checked off, but for a young mind I would consider this book a bit dangerous without parental discussions about the content. On the other hand, it is not nearly as bad as the Noah movie or the common hollyweird spiritualisms found in the superhero movies and TV shows. It is definitely a Christian book.

What bothers me is that the truly powerful beings in this book are these aliens. This “DNA containing elements of celestial-human hybridization” found in Tarakia offers power which is amazing. But the “aliens” are virtually unstoppable. But I’ll let you find that out for yourself. For me it was a bit tedious, but I imagine many CBA readers will like it.

Disclosure of Material Connection: I received this book free from the publisher through the BookLook Bloggers <http://booklookbloggers.com> book review bloggers program. I was not required to write a positive review. The opinions I have expressed are my own. I am disclosing this in accordance with the Federal Trade Commission’s 16 CFR, Part 255 <http://www.access.gpo.gov/nara/cfr/waisidx_03/16cfr255_03.html> : “Guides Concerning the Use of Endorsements and Testimonials in Advertising.”