Guy has done it again. This is a wonderful book. Let me give you the blurb, and then we can talk about it.

The sands blow hollowly across the plains of time. Unseen by man an army was on the move, an army of darkness…….
Slowly over the course of centuries the truth has been eroded away within the courts of men, until few yet stand for the ways of El Elyon, the Creator of the beginning and He who foreknew that one day the end would come…….
Ayenathurim, a world poised on the edge of change. Chaos beckons as people fractured apart by ancient rivalries strive to hold on. The sounds of war echo on the wind, but who yet is able to stand in the gap for those who are blind to the signs of the times…………………the end, if so it must be, heralds the rise of heroes, even as monsters roar, and kings rise and fall. As Evil triumphs over the nations, even so it was foretold to come to pass and yet the end of darkness’s reign has already begun…….

First, some publishing business: this book is still being edited as this review is being written. This means that it is free at Smashwords and 99¢ at Amazon for the Kindle version. It also means that the book is basically rough copy, so you’ll need to put up with editing problems until the final version is released early in 2015. Right now it is a wonderful bargain.

High fantasy on an epic scale: a wondrous tale with serious content Unlike Guy’s previous books, this is not another speculative fiction, action/adventure, fantasy, romance romp as part of a series. It is much larger in scope. It’s a standalone high fantasy novel containing culminating battles of an entire world. Guy says his inspiration was El Cid. I don’t know about that as I have never seen the movie. Ayenathurim is a built world from Guy’s fertile imagination which enables Guy to tell the entire story of God’s dealings with mankind as an epic fantasy. Of course, it is fiction. As such, it will undoubtedly drive doctrinal purists nuts. So what? It’s not Earth as we know it, but the spiritual realities ring true. If you love fantasy, you’ll love this book.

The spiritual warfare involved has that touch of truth I recognize as a believer of forty years who has worked in deliverance. For the non-believer, it is simply exciting action/adventure. It’s an uplifting book as is normal for Guy.

A seemingly normal young man, a bastard product of rape, is driven away from his home. He meets a man who transforms his life. He becomes a wonderful warrior for good in the world. He defeats demons, legendary beasts, and eventually leads a huge army bringing good to a world that is really not interested.

He finds and marries a good woman with whom he shares a powerfully uplifting marriage as he wages the wars he’s called to fight. This is epic fantasy that will stir your soul. 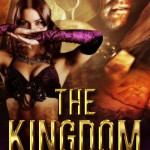