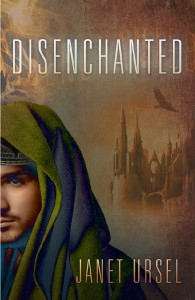 As you know, I do not say this often: Disenchanted is a great book! My hope is that the rest of the trilogy fulfills the promise. What I’ve seen so far is an impressive effort by Vox Dei Publishing. Janet’s Website is also very well done. Through her site I’ve now read two of her short stories (you know how I complain about them) and they are also excellent.

What can I say? I am really impressed with Janet and her book.

Only the print version is available as I write this.

This is Christian epic fantasy

Here’s the blurb from Janet’s site:

In a parallel Earth, populated by witches who fled Cromwell’s England, an influential wizard turns his back on witchcraft at the worst possible time, leaving his land of Coventree vulnerable to a traitor who plans to subject it to the rule of the Black Priesthood.

This book shows that the author really understands spiritual reality. In fact, several times I noted occultic references which clearly demonstrate that the author knows enough to assume things which may not be known by the reader.

That being said, this is a very well done, dramatically Christian book of the edgy type. It is epic fantasy. It is filled with the beginnings of spiritual warfare.

The characters are realistic and very compelling. The twists and turns of the tale are exciting, interesting, and unpredictable.

Spiritually, it is strongly Christian but still developing

It’s neither Bible-based nor mainline, yet it’s not spirit-filled either. As a gut-level ranking, I’ll put it at about a 4.4 based on an unsubstantiated hope about where the story is going. It’s a clear four regardless. However, this is not Bible-thumping by any means. There’s no preaching. There’re no clear rebirth experiences. Yet, lives are definitely transformed with radical changes in the lives of the characters involved. The evil of both white and black magic is clear. The romance is very well done, and in strong contrast to the “free love, no responsibility, loose sex” of the supposedly “good” country in which the story primarily takes place. I found it to be a wonderful and edifying mix.

I highly recommend this first novel

Vox Dei gave me an ARC with a review expected, no strings. What a joy it was to get a book I can recommend without equivocation.