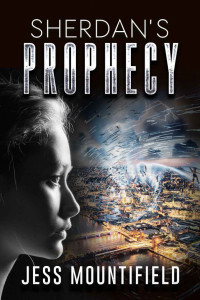 This is an intense story about following the guidance of the Lord into a very scary and painful situation. Anya is sent by her church to find out about a potentially terrifying new cult, led by a blindingly charismatic leader. She is immediately captured and brutally tortured.

How can this be God?

This genre-blend of science fiction, political/military thriller, plus romance is compelling. The suspension of dis-belief happens quickly and smoothly as the reader is drawn into a world of fascinating characters, strong personalities, and brutal terror.

Putting up with horrific torture is not a normal part of the daily walk in the spirit—yet—in America and Europe. But we all know it could come at any time. Is this story prophetic? No. It’s quite a speculative distance from reality. However, the anticipation of very difficult cultural events is real and Jess captures that concern, using it to draw you deeply into Anya’s predicament.

Sherdan has spent many years planning for the future of the superhuman race he’s created. Now he’s in control of their land and he is expected to forge a fresh start and provide somewhere safe for them all to live, but Britain’s PM has other ideas. On top of this he has to face the one thing he never expected to; love.

Anya is on a mission from God; to find out why she has been sent to the heart of Bristol, and what she can do to stop the world being plunged into war. When she finds herself forced to choose between Sherdan with his enzyme fuelled followers and her own country, only her faith can see her through.

Sherdan’s Prophecy is a tale of high stakes and political intrigue. A science fiction novel where faith and technology come together to take the human race another step closer to the final showdown. A gritty account of power that shows both the best and the worst of humanity.

This political/military thriller is very hard to put down

Sherdan is a ruthless leader, driven by a prophecy given through a genius doctor. Is the prophecy real and true? That’s what Anya is being led to deal with. I refuse to spoil it any more than I have.

But it will test your view of reality. This is realism at a level rarely seen in Christian fiction. It’s a clean read that skirts the limits. Jess skillfully avoids titillation while dealing with emotional and spiritual issues rarely talked about. It is really well done.

This book appears to be perma-free, so check it out on Kindle, the iBookstore, and Smashwords.