↓
Home→Book Reviews→Fantasy→Isaiah: The Spirit of the Tree (Isaiah Tiller Book 2) by Andrew Simmons 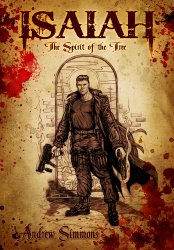 Isaiah: The Spirit of the Tree (Isaiah Tiller Book 2)

It was very late in the evening and the sky above the glass-covered garden was dark, as the moon had already set. The garden was very peaceful for Ichiro Katsumi as he walked the main path near a small babbling stream. A few moments later, he settled on an old wooden bench beside the running brook. The sound of the moving water always helped him to relax, so he closed his eyes and rested his head for a few minutes. Soon the beeping of his watch told him he needed to return to his late night work. He stood up and stretched as his ear caught the faint sound of singing drifting on a non-apparent breeze.

“Where is that coming from?” he wondered to himself aloud as he strained to listen.

Ichiro’s curiosity caught the better of him as he walked toward the soft melody. He followed the man-made brook and came upon a Japanese maiden dressed in a full kimono sitting at the water’s edge. She had a basket of Japanese pears on the ground next to her and was singing ever so softly. Ichiro watched from behind a bush for a few minutes before he decided it was time to present himself.

“Excuse me young lady, but may I be of some help to you?” he asked in Japanese as he stepped into the open. The maiden focused her attention on Ichiro as she gracefully stood to her feet. Her singing grew louder and completely mesmerised Ichiro. She held out her arms and he started walking toward her. His face displayed total bliss as he found himself wrapped in her outstretched arms. She raised her lips up to his and they kissed. Tears of joy streamed down his face as the magic of the moment touched his soul. Then without warning, it was replaced by pain as tree roots erupted out of the ground and dug their way into Ichiro’s legs. He tried to scream, but he could not pull his lips off hers. His body shook violently as the roots made their way up into his abdomen. Ichiro ceased to struggle when they pierced his heart. The maiden let go of him and he fell to the ground, his dead eyes open wide in terror and blood dripping from his mouth. She continued to sing the hauntingly beautiful song with her blood red lips as she disappeared into the garden.

Any reader is going to be in a very opportune position when they discover a series that has either some or all of the series already published. It is even better when, on top of this, the series is one action packed, attention-grabbing, cannot put down, all absorbing and thoroughly enjoyable read. Such is the case with the Isaiah Tiller series.

After finishing Book 1, I just had to read Book 2 and it was such a joy to have this available. The only downside to this is that I have to wait up to six months for Book 3 to be released and how Book 2 ends, I am very eager to read this next instalment.

Simmons has constructed this series with an ongoing storyline from Book 1 interspersed throughout the action of this instalment and it gives the impression that this not only enhances and add layers of suspense to this instalment but also provides further continuation of all these in preparation for Book 3. It does not detract from this book’s storyline and the flow between the two is very smooth and seamless. A very clever technique. So if any reader of Book 1 has any questions about Deena and the rivalry between the Jahai and the Valcarda families and the associated subplots, and more about the vampire hierarchy, then keep reading! With every new chapter, I found myself wondering if I was going to get more of this book’s story line or more of the continuation from the last book! Kept me guessing and I liked this feature very much.

This instalment shows more of the demon entities that the Hunters, as Isaiah calls his team, fight. We have the same weapons as in Book 1, but this time Isaiah fights ghouls and an evil spirit. Again we have the reliance on God by Isaiah and how he comes humbly before God for strength, guidance and discernment. This time however, Isaiah may have met his match as the supernatural entity he fights is one formidable opponent and he nearly succumbs to its power, but as usual he has it all worked out in preparation before this confrontation. Simmons has even introduced a touch of romance for Isaiah! Despite this being 71 pages, the suspense, action and all the clues are lined up and very nicely tied up very tightly. I love the log book entries that he includes in each book, his case notes if you like. Reminds me of the Captain’s log that Captain Picard from Star Trek has in each episode. This closes off very nicely these instalments. I also love this spiritual warfare, special ops type environment and Simmons creates and develops this extremely well. The blend of these genres at first glance one would not consider they could ever form a compatible marriage, and yet they do.

I admire Simmonds talent for writing, characterisation and plot construction. I would love to see him write a full-length novel in the future. If this series is giving him confidence and refining his craft, then all I can say is his future novels are going to be well worth reading and supporting.

I sincerely hope that Simmons has no delays in preparing Book 3 for release as I cannot wait to see what he presents us with next.

If any reader liked the first instalment, they will love this second one. It will sit extremely well between Books 1 and 3.