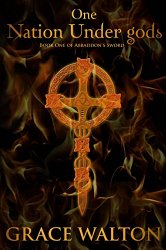 One Nation Under gods (Sword of Abbaddon Book 1)

This is a novel of what ifs. What if, through the centuries, the Christian religion remained a small house church movement? What if it never became a mainstream faith? What if the Bible had never been gathered together from the many and disparate scrolls of wisdom existing to encourage and nourish those first few early Christians? What if one repentant, forgiven Nephilim/Half-Breed Angel family remained? One family so committed to Christ, they dedicated a man in every generation to serve God in a most horrifying and sacrificial way? What if?

Half-Breed Angel Salem D’Angelis has his life all planned. He’ll run the family’s vast Texas ranch. He’ll marry a local girl. He’ll start a family. He’ll escape his family’s celestial curse and live an ordinary quiet life. Then it appears – the supernatural summons marking him as the Sword of Abbaddon. Now without flinching, he’ll use his preternatural skills and gifts to be God’s Destroyer.

Lily Meade comes from small-town Pagan royalty. Her grandfather is the High Priest of the Pantheon Church of beachside Providence Point, Texas. Her Nana is the church’s hereditary Oracle. Lily will inherit that position if she completes her one-day service as a Temple Servant. But how can she be a prostitute, even a holy one, for 24 long hours?

Their lives collide one hot summer night. She’s running away. He’s stoically facing his destiny. Salem knows his life is almost at an end. Lily thinks hers is just beginning. The only things standing between them and ultimate destruction are ten righteous people and one tattered scrap of Holy Script.

Love is powerful and often used as a weapon. But can it or any puny human effort, ever truly stay the Sword of Abbaddon?

When I saw this book on the Free Read Feed site (free kindle books), I had some reservations about downloading this to read. You see, it contains one of my favourite topics, the Nephilim, and a genre I am not so fussed on reading, Romance! The last thing I wanted was for this book to be yet another of the myriad of paranormal romances between angels and humans, even from Christian authors! Yet what helped convince me was two things, there were very edgy speculative elements in the plot and Amazon classified this as Religious & Inspirational Fiction > Science Fiction & Fantasy and not paranormal romance. Christian science fiction and fantasy are some of the genres I review and I love novels that contain edgy, speculative elements. Seeing it was free, I considered I had nothing to loose.

I do, however, know that an author makes a book free to increase the book’s exposure, including promotion by word of mouth, and hopefully get some sales and reviews in the process. So writing a review would not be an issue for me as I review every book I read.

The edgy, speculative elements in this novel I found very intriguing and wanted to see how this author would blend bible truth, doctrine, Christian romance, the redemption of the Nephilim (one its own one very edgy, speculative and controversial topic!), spiritual warfare, demonic possession, demonic curses and enchantments without compromising the Gospel. Sounds like a very complex and challenging feat for any author! I must say that after reading this novel, I can quite honestly say Walton has successfully achieved this. All the above elements are blended in seamlessly into the world building that she has created. I am not a romance reader, but I do enjoy the inclusion of romance if it is not the dominant topic of the novel but is part of the many other elements/topics or plot lines. In this novel, such is the case. I really enjoyed the romance between Lily and Salem, and it seems Walton excels in this area (of romance) as she has achieved this in her previous novels, not that I have read them, but the reviews say so!

I loved the supernatural elements between Salem’s lineage and Lily’s. A violent clash between good versus evil, the angelic versus the demonic, the Omnipotent versus demonic power, God’s Word versus a demonic counterfeit gospel. All this created an increasing level of suspense and tension throughout the entire plot, especially between the developing relationship of Lily and Salem, the fulfillment of the special mission from God that He has bestowed on the D’Angelis family, and the evil taking over Lily’s grandmother.

I was impressed that Walton is not afraid to present the Gospel in this novel. It needed to be in order for Lily to know the truth and decide to accept Jesus and for any reader who is a non-believer to be exposed to this too. I guess also, that because Lily grew up in a pagan/demonic cult and is very disillusioned in it, then it makes sense for her to know the truth behind this pagan way belief system and this truth can only lead to Christ. I must say though that the Gospel elements are not preachy, not contained in only one conversation or single part of the plot but is interspersed throughout as we see Lily learn about God, His Word, repentance, forgiveness, salvation, mercy and Christian/Biblical living leading to her conversion.

Walton has depicted the sexual promiscuity of thought and behaviour typical of pagan/satanic worship and it is not just hinted or mentioned but is slightly graphic in speech and innuendo especially as part of the attitude of Venus who is a product of this pagan cult and her dislike of it. At first I was a bit annoyed at this, but then realised Walton is only depicting how people would act in an environment where many cults co-exist with their lack of sexual morality and where Christianity is the extreme minority. I was glad that this was so and not the attitude of this Christian author. As far as Venus is concerned, this depiction of her being a product of the pagan cult dominant in sexual promiscuity, showed the spiritual deficient and sense of hopelessness that she felt and it was this that led her to finally realise that it is the God that Salem and Lily follow that she needs.

What I found interesting was the specific speculative elements relating to the background of the spiritual mission that God had bestowed on the D’Angelis family. Here God had chosen the D’Angelis lineage as Nephilim to be granted forgiveness and salvation and for a male member or each generation to be the Sword of Abbaddon who would be used by God to eradicate that current city if this appointed Sword could not find an unpublished piece of Holy Script and 10 Christians (Christians are in an extreme minority in the culture depicted in this novel). If so, then God would spare this city and apocalypse would be avoided. Once Salem accepts and dedicates himself to the role of Sword of Abbaddon, repents from his life of sin, deepens and furthers his relationship with God, that forms the springboard for the Gospel to be presented to Lily and for him to show the Love of Christ to her and live out the Gospel in his life. I really enjoyed this and I applaud Walton for portraying this in a Christian character that could also be seen as an ideal Christian male role model. It was great having Salem’s brothers be part of the plot towards the end with their different spiritual powers and them being a band of brothers to rescue Lily as assist in Salem’s mission as the Sword of Abbaddon.

Another area where Walton shines is plot development and how the various plot lines are tightly interwoven and interconnected. This makes the plot flow very smoothly and contributes greatly to the building of suspense and intrigue. No wonder myself and other readers say this is one book that you cannot put down.

Walton ties all the main plot lines together very nicely for those concerning Salem, Lily, and all the support characters and leaves the reader with a plot line open for the continuation of this series, this next one being about Salem’s younger brother, Rome.

I am really looking forward to the remaining two novels in this series. Walton states on her website that this novel is her first foray into the speculative Christian fiction genre and she does this very well and I say this as one who reviews in the majority of this genre. She has proven from this novel that she is quite a natural at it. I would love to see Walton explore this genre more once she has finished with this series.