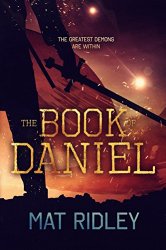 The Book of Daniel

Death is only the beginning for Dan. Waking up to find that his wife, Joanna, has also been killed is bad enough, but then Dan also finds a sword shoved into his hand, and is told that the only way he’s ever going to get to Jo—and Heaven—is if he does as God tells him and fights against the forces of Satan’s army.

But demons are the least of Dan’s problems in the afterlife. There’s also his hatred of God to contend with.

And Dan is pretty sure that God hates him right back.

I won this novel through a Goodreads Competition. I was drawn to the plot description, but I had no idea it was literally about Purgatory despite the mention of this in the description. I did not interpret that it would literally be about Purgatory! As a winner of a Goodreads competition, you are encouraged to review your winnings as not doing so can contribute to you not being eligible for further Goodreads competitions. So read it I did.

Ridley seems to be quite a natural at the command of the English language and syntax (grammar, sentence structure, spelling). I find this forms a great framework to build this novel with its characters, plot and theology and is one very well constructed novel.

Ridley has structured this novel in a sequence that flows well. The reader starts off with the present and the events leading up to Daniel’s death, then his past recounts him as a teenager meeting his future wife, Jo, his Christian upbringing, parental disharmony, their separation and mother’s crime leading to her incarceration and subsequent suicide, all of which destroys his faith in God, distorting his journey to adulthood, his attempts at improving his life in spite of his destructive and toxic upbringing, his blossoming relationship with Jo leading back to the present and his death and then finding himself in the afterlife, or purgatory as described in this novel. This part of the novel needed to be sequenced well to avoid disjointedness that would affect the second half that deals with his “life” in the afterworld/purgatory.

Despite enjoying this book purely from it being very entertaining, I must confess that I had a sense that something was not quite right about this book. Was it the subject of purgatory that goes against my Christian beliefs and biblical doctrine? I guess it was, but if there would be one questionable topic in this novel, there would most likely be another or even more. Well, I had only to keep reading and I discovered this to be so. The author, through the character of Saint Peter, says this of the Bible,

The Bible as you know it is an interesting book. Many people maintain that it is the literal word of God, and the infallible truth, the key to eternal life. That was certainly the intention of God and those first few authors that spread His word. However, as with many noble endeavours, the problem of corruption arose as more people got involved. Some of the corruption was unintentional; a scribe’s mind would wander when copying a particular passage and words would get left out, or a poorly educated scholar would pick the wrong work when trying to translate scripture into another language. Other kinds of corruption were deliberate; politically motivated alterations made in the interests of uniting certain groups of people or turning them against one another. Over the thousands of years that have passed since the original texts were written, so many changes have been introduced that it is impossible for any mortal to know which parts of the Bible are God’s truth and which parts are man’s fiction.

Well, at this point, I nearly gave up and I was angered by this. This author seems to have deliberately ignored the verse,

Every Scripture passage is inspired by God. All of them are useful for teaching, pointing out errors, correcting people, and training them for a life that has God’s approval.

I then thought that this would be expected if this author was not a Christian. On his website and bio, he does not admit to such, but in the Acknowledgements in the book, he states,

To God, for the inspiration and opportunity to write the novel in the first place….

This is the only reference or hint that this author has some degree of relationship with God. That is encouraging! However, I have a problem with this. God inspired him to write that the Bible is corrupted? Despite the Bible saying that it is inspired by God? Is this verse corrupted as well? So God has contradicted Himself? The God of the Bible that I know is one who is perfect, holy, consistent, incorruptible and is the very Word of God. If all the former statements from the author are true, then why bother with it? As the author has Saint Peter say,

…..it is impossible for any mortal to know which parts of the Bible are God’s truth and which parts are man’s fiction.

Yes, I know every author uses poetic licence for all the reasons they do, and I welcome that in fiction, but when it distorts bible doctrine, the Bible itself, who God is, then this is where the author and I part company. I fail to see how even in fiction, an author who hints at being Christian can portray the very tenures of his faith and of the things of God as the opposite to what they are and what he is supposed to believe. It even puts his own faith in question. In all things, there are boundaries. In Christian fiction, poetic licence should not detract from known facts or the Bible, it can enhance them without distorting its original meaning or intent or from who God is. It shines best when it fills in the gaps between facts without, again, distorting or detracting from the original fact, meaning, intent or person.

There are many more of these distortions and detractions concerning the bibleand who God is. Too long this review would be if I quoted them here but, suffice to say, I found it very disconcerting and disappointing to say the least. Another main is that that everyone goes to this place of purgatory to deal with their issues from their earthly life as God wants everyone to have a second chance to spend eternity with Him but, if they do not sort these issues out while in purgatory, then they go to Hell. He even goes to say that God,

….still hopes that one day even Satan will see the error of his ways.

Hmm, wasn’t that what Hell was created for? Satan and the fallen angels? The bible is clear that salvation and forgiveness are for His human creations only and that Hell was specifically for satan and his angels.

What concerns me about all these distortions and distractions is that if this type of fiction only reinforces the belief in those who do not believe the Word of God is inspired by God and that you don’t go to Heaven or Hell when you die, but go to Purgatory first or the twist at the end of the novel concerning it. These and the others that I have not mentioned here are not backed up biblically or even based on the bible but, this author believes that everything in this novel is inspired by God. If that is so, then I have been following the wrong inspired book by God, the Bible, and a God who contradicts Himself in each book.

Just when I thought I had had enough of Ridley’s theology/gospel, he throws in a twist at the end, all that has been up to that point is not so but again, it is not based on the bible and is a distortion of bible doctrine and who God is.

I state in my blog that I expect from Christian fiction,

Generally, I hope at the end of the novel,

If it includes a topic that the bible is silent on, I don’t get too concerned as long as it:

If it does, then this will show in my review.

This novel has only met one of the above criteria, it entertained me, however, I would not say immensely. Unfortunately, it has not encouraged my walk or relationship with God, it deviates from known bible doctrine and I don’t believe it honours God. The bible is silent on Purgatory solely because it does not exist but the inclusion in this novel of this concept and the twist concerning it at the end, does conflict with the Bible and its doctrine and I believe will give a reader who is searching for God a misleading impression of who God is.

This novel is very much the gospel according to Ridley.

I cannot give this an overall rating but will do so as follows: