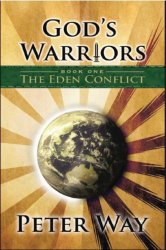 The war between good and evil erupted long before mankind ever walked on this Earth. Since Adam took his first steps, Satan and his followers, the demons, have sought to destroy and control the souls of mankind. But the protectors of God’s creation are always close by. Who are they? They are the good and the just, they are the angels and the saints, they are… GOD’S WARRIORS!

In the small country town of Eden, Jack leaps off a stone pier, prepared to land in the storm ravaged waters of the bay. Instead, he finds himself instantly transported to the Garden of Eden. Jack is returned to Earth by the guardians of the Lord’s garden and into the care of an elderly minister. Unknown to any of them, there was a witness…

Six months later a guardian angel discovers a new den of demons in a building project in far north Queensland. The den has more than three times the usual number of guards. The angel knows he has found the lair of one of The Seven Deadly Sins, the biggest and nastiest of Satan’s demon forces, his generals. Why are they here? What are they building? Whatever the answers are, Michael, the Captain of the Heavenly Host, needs to know of this place. But before the angel can do anything, his charge, a reporter named Glen is chased from the lair. Can the angel protect Glen, find answers to his questions and still get a message to Michael?

I love the feeling that one gets when they read a book blurb and they continue reading their interest intensifies, their grip on the book or mouse tightens and they suddenly realize this is a book they have to read. Such was the case when I read the blurb for The Eden Conflict. Another factor for me was the fact that this was an Australian author who had also set this novel in Australia. As an Australian, I knew I would feel right at home, and I did.

This is Way’s debut novel and he has created quite a tale! This is not one short or average length novel but a grand one, of 532 pages. And it is packed with action, suspense, the supernatural, the angelic, the demonic, deception, the gospel of the Lord Jesus Christ, His sovereignty, spiritual warfare, and interspersed throughout a faith building and edifying account of the reality of spiritual warfare and the power of prayer.

Way admits to basing this novel on the style of Frank Peretti’s This Present Darkness and it definitely shows. He seems to have been influenced so much that he has taken this genre to the next level. I have read Peretti’s book twice (and its sequel) and can see that Way has expanded on the spiritual warfare, prayer, supernatural, demonic and angelic aspects that Peretti has constructed so cleverly and Way has added many more to enhance those of Peretti. I by not means intend to imply, by this observation, that Way’s novel is better than Peretti’s. The latter holds a special place in my reading appreciation for creating this unique genre of Christian fiction and I hate comparing one author on the same genre with another. It is a great compliment though for authors to base their novels on the original author’s works of these genres, just like fantasy authors have been inspired by the original creators of the fantasy genre, those being Tolkien and Lewis.

Way needs to be applauded for keeping the action and the many plot lines well connected and flowing smoothly. This prevented me from being disconnected from the plot and wanting to give up, especially with this longer length. There is a lot that happens in this novel and even though the pace slows down in some parts, there is enough happening here to keep you reading till the next plot development.

The spiritual aspects are superb. Way shines in presenting everything backed up biblically and any embellishments from poetic licence do not detract from this biblical truth. His angels are just as they are biblically presented, messengers, warriors, guardians and totally submitted and surrendered to God and to honour and glorify Him with their very existence and roles. There are very many presented in all these roles and I am sure most readers will become attached to at least one during the course of their reading. Mine were Michael and Daniel.

Way has a few of his characters accept Jesus as Lord and Saviour. This happens to one of the main characters and Way uses this to add an evangelistic tool to present the Gospel to the reader. I was impressed with his use of bible verses to show the spiritual deficit and need for Christ of this character and also how it fitted in with that particular plot line she was involved in. I find it sad that some Christians resent inclusions of salvation encounters and I don’t know why. Sure, it makes the plot slow down somewhat and some would see this as detraction from the plot, but in a novel of this genre and plot that involves spiritual warfare, I find it very fitting and appropriate. Way also includes many prayers of the Christian characters, especially Glen, one of the main characters, and again, it saddens me that those same Christians would also have these removed from novels if they could; however, like the salvation reason, in a novel of this genre and subject matter, it is appropriate to have the prayer in full and not just mentioned that the character prayed as in some other novels. We are after all talking about spiritual warfare, the battle of angel versus demon, good versus bad, satan’s rebellion against God, and over the souls of humankind and where they will spend eternity.

I really loved and appreciated Way including the Holy Spirit and the presence of Jesus as well. He has captured the Spirit’s character very biblically, and the angels in relation to Him represents their role biblically and the scene where Jesus is depicted and what He does is also true to Jesus’ nature and is backed by the Bible as well.

Having salvation account(s), full prayer portrayed, and spiritual warfare principles, all intertwined in a fast-paced, supernatural thriller like this one only reinforces my attitude concerning Christian fiction, that it should encourage, edify and entertain. And it does so very well in this one. I especially loved the account from Michael to Saint Peter of the days of creation from the angels point of view. That was refreshing.

I know some readers do not like reading glossaries, appendices etc, but in this novel, due to its complexities in plot structure, hierarchy of angels and demons and biblical doctrines, it would pay the reader to read these after the completion of the novel, as I am sure some readers will question why Way did what he did on some of these topics and these appendices will help to quell any criticism by explaining his methods and reasoning. Authors need to do this with novels that have sensitive or controversial topics and it adds to their credibility as authors. These 5 appendices show that Way has researched the topics in his novel well and it is this that I appreciate very much in novels of this genre.

Way describes it this way (excuse the pun!) from Appendix 1,

I found that there was a lot of information about angels and Heaven. The only way I could decide what I thought was good enough to use or not was to weigh it up against the Bible. Bottom line, if the Bible didn’t back it then I didn’t believe it or use it. However, I have embellished some things, which you will not find in the Bible. What you will find is that the Bible does not contradict it either.

Just as Way has depicted the angels with their different roles and hierarchy, he has also depicted similar with the demons. This works well with the type of demon, their ranking and submission to their leaders in relation to the plot lines that involved them and their destructive, negative influence on the humans that they are assigned to. I really appreciated the appendix that explains more about them. These are depicted as very evil, despicable, hateful of humans and especially of all things relating to God and His angels. Way has structured the demons to specialise in influencing and tempting their human charges in the various vices that humans experience such as lust, greed, deceit, depression, anger, etc. Above these are 7 Princes of Darkness and a subgroup of psychic demons.

I must make comment that for a debut author, Way has taken care in constructing the fight scenes very convincingly and I would love to know if he researched this at all, has prior experience in sword fighting or is just a natural at writing as he sees it in his mind. Either way, he is very convincing. All this does is add credibility to the whole plot and overall enjoyment of the novel.

Looking at all this, I can say that this is one hard to put down novel. To get the best enjoyment from this, you need to devote long periods of time to savour and appreciate the action, suspense and layers of intrigue and spiritual encouragement that this novel brings.

Way ties up all the plot lines very nicely leaving the reader hanging at the end with the seeds sown for the next instalment and from this, it seems the next one is going to be just as good or better than this first offering. I can hardly wait.