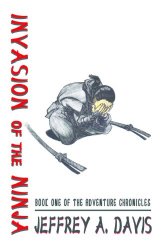 Invasion of the Ninja (The Adventure Chronicles Book 1

Jamie and Yoshi are late twentieth century members of the Funakoshi ninja clan who were trained by Yoshi’s uncle, Tanemura Funakoshi. When the Waruiyatsu, a sinister clan with an ancient grudge, attack Jamie’s high school and hold his classmates hostage in an effort to bring Tanemura and his two students into the open, Jamie and his clan sister are forced to attempt a rescue.

Going along are a close group of friends, each with his own interest in the fighting arts. From Dave, whose muscle-bound frame and love of a good scuffle are overshadowed by his cheerful personality and kind heart, to Buster, whose Bible is his greatest weapon, each of their friends has a loyalty to them and each other that is stronger than the Waruiyatsu can ever fathom.

This is a story of courage, friendship, and faith ….

This will be my first novel involving martial arts, the first one combining this with Christianity and the first from this author.

I have not had much to do with martial arts, maybe only what I have seen in the movies/TV, so I will have to take what the author says as gospel so to speak as far as the terminology, practice and culture of this discipline.

Now based on this, Davis makes a very convincing case in his depiction of the behaviour and practice of the ninja’s martial arts discipline, especially the fight scenes. In the former, I could see that the training in this discipline had contributed to these teenagers having greater maturity and focus for their age not just on the events in their daily life but especially in the terrorist/hostage situation that the Waruiyatsu clan has inflicted on them. In the latter, Davis may have an advantage over other authors as these have to learn how to write fight scenes or write them blind but due to the nature of martial arts and having grown up in this culture, Davis would have known what and how to write these scenes. And he does this very well. Sometimes I struggle to follow descriptions of fight scenes but Davis has created them realistically and simply and I could picture it much easier in my mind than in other author’s fight scenes.

The prologue provided a very sound background to the feud between the Waruiyatsu and Funakoshi clans that visits Tanemura Funakoshi and his clan, including protégé Jamie Raleigh who is not part of this clan. This storyline would have fallen flat otherwise and the plot would be reduced to both clans fighting for the sake of fighting and this is not what martial arts is about. I appreciate Davis’ commitment to the realism of martial arts and honouring this disciple. Makes for a convincing and credible plot for the reader.

I noticed in some of the reviews that there seems to be some criticism of Davis for combining martial arts with the tenets of Christianity, that both are incompatible with each other. Maybe on the surface it is reasonable to think like this but upon further inspection I don’t feel this argument holds up. From what I can see about martial arts, it is about self-defense, as well as building self-confidence and developing self-control. Any program that has as it aim to equip someone to defend themselves if physically threatened is a good thing. I don’t believe that as Christians we need to do nothing if we are attacked physically (or even verbally for that matter). If a Christian’s health and safety is violated, they have the responsibility as steward of what God has entrusted to them, (their life, body, family, job, possessions, money, ministry, various roles: parental role, spousal role and gender) to look after this and honour it as part of who He made them. Not fighting back gives the offender unnecessary power and condones their behaviour. If any training, in this case, martial arts, equips a Christian to achieve this, then I cannot see how this conflicts with Christianity. In this novel, that is all the Adventure team were doing, defending themselves and their fellow students from the terrorists that threatened them and put their health and safety at risk of death. Any terrorist that was killed in defending against their attack is all part of self-defense.

Putting this serious issue aside, I found this novel to be a fun read. I like the characters and Davis seem to have a knack for depicting teenage characters as teenagers and the dynamics that go with their relationships. Seeing this is a young adult novel, this novel succeeds. I pray that the spiritual aspects of this novel encourage the young adults that read this novel and the subsequent ones in the series. It was impressive to have one of the teens, Buster, the Adventure group’s resident spiritual leader, lead the group in prayer at the most critical moments of the offensive against the terrorists and have them respond sincerely exercising their faith. To me, this seemed to not only encourage this group to trust God in this situation but to also receive His guidance to counteract them relying on their ninja skills and training alone. I also found it significant that there was a specific aspect of their prayer to allow Him to control their martial arts skills and training and they would stay within this boundary.

The only aspect that concerned me was the plot development concerning the students held hostage in the school. This came across as if they were on a school camp rather than the seriousness of being held against their will, with their freedom curtailed and future is grave doubt. What reinforced this was the lack of frequent instances to show how it would be for them.

Apart from this, I was very much taken with this story and am glad there are two more novels in the series to enjoy and be transported to the world of teenage ninjas.