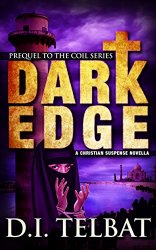 In Dark Edge, Prequel to the COIL Series, Christian suspense by D.I. Telbat, we find an international thriller providing background to Corban Dowler and the COIL Organization.

CIA Agent Corban Dowler has refused a kill order, therefore, he is sanctioned for assassination by the very agency he has worked with for years. As Corban runs for his life, he must cut all ties and even abandon his wife in order to keep her alive. His new relationship with Jesus Christ may cost him everything . . .

But Corban has a plan. He knows God’s persecuted need his specialized skills, so he follows a lead to India though poisonous clutches and a German hit squad are close behind. Disguised as a bearded Muslim weapons smuggler, Corban initiates a rescue in the midst of millions of Hindus participating in the Ganges River bathing festival.

We also meet first-recruit ex-Mossad Agent Chloe Azmaveth and her husband as they brainstorm with Corban about a new organization to serve God’s people worldwide.

With Bonus Chapter One of Dark Liaison, Book One in the COIL Series, and cover art by Streetlight Graphics, Dark Edge will not disappoint as you follow the founder of COIL to the Edge of darkness. And we learn again, there is no redemption without sacrifice . . .

I have wanted to read a Telbat novel for so long now. I have bought all his novels since the first Coil novel was released in 2011 and have followed his newsletters since as well. All this has done is continually whet my appetite to read these, but having authors continually request me to review their work has meant that I have been unable to start until now. I decided that between Christmas and the New Year I would read a novel of my choosing, so hence this opportunity to read Dark Edge.

I must say that waiting this long has been very much worth it! Christian special ops and Christian military are genres that I love to review (amongst others) and now this series is a worthy addition. The other factor that encourages me to say this is that Telbat’s motive for creating this series is the persecution against Christians in countries where its political environment is not Christ friendly. I thoroughly enjoyed this in another series by author Martin Roth in his Brother Half Angel Thriller series, where the

focus (is) on the persecuted church. They feature Brother Half Angel, an abrasive former military man who heads a clandestine new military order that is dedicated to fighting for the rights of persecuted Christians around the world.

I love the similarity between what I have discovered in both these series and the different bases of operation; Roth’s special ops team being out of a major Korean church while Telbat’s out of a specially created special ops trained Christian organisation for this purpose (COIL).

I am really looking forward to reading the rest of this COIL series. Dark Edge has set the stage really well. I am impressed with Telbat’s story telling and his knowledge of how CIA operatives work. It is obvious that he has researched this and done it well. His translation of this knowledge to how Dowler operates against this organisation that has turned against him sets the pace for one intriguing read and definitely draws you in. There is a touch of Jason Bourne (from Robert Ludlum’s novels and film series of the same name) in Corban Dowler and the situation he finds himself in. Not sure if that is intentional or not, does not matter, it makes for one absorbing action and suspenseful account and I guess sets more of the flavour for the rest of the series.

I really appreciated the spiritual aspects of this novella. It is great to see a Christian author show no fear in presenting what the power of the Gospel is and the redemptive power it contains including the spiritual change that takes place by the Spirit upon conversion and thereafter. In Dowler’s case, he is changed from a ruthless killer to one whom by the Spirit of God now residing in him, values life as God does and, therefore, refuses to kill anymore and is willing to lay down his life for God and what being a believer in Him means even to be hunted and marked for death. However, God then turns this death sentence around and uses Dowler as a new creation (2 Corinthians 5:17) and past operative knowledge and experience to rescue Christians persecuted by oppressive governments and organisations.

I classify this type of account as Redemptive fiction where, according to the creator of this fiction type, David Bergsland, this is where,

These books offer standard rebirth scenarios where a person accepts the Savior as their Lord. They give their life to serve Him and their lives are transformed—sometimes almost violently, often slowly and gently. They show a realistic look of the daily walk of faith for a believer. A clear Messiah is revealed who died for our sins. Through repentance and baptism, a person is forgiven and cleansed, beginning a new life in the Kingdom of God.

The truly excellent books on this level share these truths easily, without pretension, in common human relationships. They recognize that most people do not carry on conversations by quoting scriptures at each other. They cover the arguments pro and con. They leave it to the person to decide, recognizing that you cannot talk anyone into salvation. Only the Holy Spirit can do that. The only source of guidance is the scripture, with occasional visits from angels and the like. God speaks through the Bible or other believers primarily.

I am pleased to see that there are elements of this description in Dark Edge. Based on this, I can look forward to more of the same in the rest of this series. As I said in my reviews of the Brother Half Angel Thriller series, I pray that this series can do a number of things; alert non-believers to the hope and life that exists in a relationship with Jesus, encourage a greater understanding of the plight of persecuted Christians in the believer and non-believer alike and encourage more Christians to pray for these Christians and even to be empower to follow God’s call to do whatever He wills for them to do for them.

I very much look forward to the rest of this series, having my spirit edified, my relationship with God challenged and being educated in the plight of persecuted Christians.

I applaud Telbat (and Roth) for creating this redemptive fiction that not only entertains but does more as just mentioned and this is what Christian fiction should.