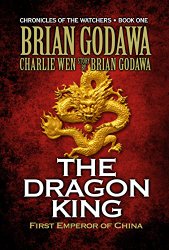 The Dragon King: First Emperor of China (Chronicles of the Watchers Book 1) Two Epic Storytellers and a Clash of Ancient Cultures.

Brian Godawa, best-selling author of ancient historical fantasy, teams up with Charlie Wen, the past visual director of Marvel Studios, to tell an action-adventure romance rooted in the ancient history and spiritual reality of China.

Written through the Watcher paradigm that was familiar to readers of Chronicles of the Nephilim.

Antiochus takes with him his longtime friend, Balthazar, a member of the Magi order of Babylon, responsible for both the religion and science of the empire. But Balthazar also carries with him a dangerous secret that could destroy Antiochus’ plans and plunge the world into chaos.

They sail beyond their maps into the mysterious and uncharted Eastern Orient. They are discovered and escorted inland to the empire of Ch’in (now known as China), ruled by the first emperor, Ch’in Shi Huang Di. The emperor is a brutal ruler and is on the edge of insanity in a mad quest to find the elixir of immortality.

Antiochus meets and falls in forbidden love with a beautiful concubine of the emperor, Mei Li. But she also harbors a secret that can bring down the mad emperor. It’s the truth of China’s spiritual past that is mysteriously connected to the ancient Hebrews and the Tower of Babel.

And there are spiritual principalities and powers who seek to stop them all. These are the Watchers, who have their own plans to rule the world. Finding and capturing a dragon is the least of Antiochus’ difficulties in this action-adventure clash of cultures and war of gods.

Part of the Historical Fantasy Series Chronicles of the Watchers.

The Dragon King is the first book of the Historical Fantasy Series, Chronicles of the Watchers, that charts the influence of spiritual principalities and powers over the course of human history. The kingdoms of man in service to the gods of the nations at war. Completely based on ancient historical and mythological research.

I could not resist accepting the author’s offer of an advanced reader’s copy on condition for an honest review. This is my first reading of Godawa’s novels. I have all his Chronicles of the Nephilim series and have not read them yet much to my frustration of having too many books to read and my passion for reviewing new authors novels and specific genres in Christian fiction! So in this situation, The Dragon King is one very good introduction to the writing and creativity of Brain Godawa.

Godawa writes very well, specific, not too descriptive, no excessive difficult words. You know exactly what he is describing and depicting. I felt like I was in a Greek culture despite not being in Greece (but in Mesopotamia instead), as well as China, especially the latter, as this culture and environment were created very life like. I guess what helped me in this was the list of the English pronunciation of the Pinyin translation of Chinese words and of the English translation of Greek words used in the text. This is also an example of the research and creativity to make this novel realistic and credible. Godawa has joined the dots in his research of the Watchers and the Nephilim and how these are is connected to the Bible and virtually every culture and it is very consistent with much of the research and reading I have conducted myself concerning these topics. I had not specifically joined the dots myself with these and the Tower of Babel, and I loved how the Chinese have characters in their language that specifically relate to this biblical account and also that there was a Greek alternative of this as well. I loved the action and adventure that is very much interspersed throughout the plot especially where it takes place in the East, in the region of Ch’in, which we now know as China. Godawa seems to be quite a master at pace, characterization, and action. There was no slowness of pace or troughs in the plot. I would love to see this as a movie. It would translate well and I am not surprised at this given Godawa’s background.

I must say that another construct I loved was the depiction of the Magi that we know from the Bible, even though their names as given in this novel are not mentioned in the Bible but whose names we know from other non-biblical sources as Balthazar, Melchior, and Gaspar. Interestingly, that we tend to think that there were three Magi (wise men) in the Biblical account because there were three gifts presented to Jesus, but the Bible it says that either wise men or Magi came from the east to worship Him, not three wise men or Magi. However, Godawa runs with these three Magi and has them as the ones who mention the coming Messiah from their prophecies in the beginning of the novel and who pursue this prophecy at its end. I loved this poetic license and look forward to seeing further pursuance of this plot line in future novels in this series if that is planned by Godawa. I really enjoyed the banter/bickering and competing with each other for the position of high priest between Gaspar and Melchior, these two were a bit of comic relief for the novel but had great respect for each other and submitted to each other as well as to Balthazar who appeared to be the elder type figure of the three.

I am not one for romance taking over the plot or it being the main genre of the novel but really enjoy it when it is part of the plot and I love how Godawa has developed this between Antiochus and Mei Li. It is not sugary sweet or all consuming but just in the right balance. I appreciate in a Christian novel like this that Godawa has not overemphasized or included for that matter occurrences of lust; yes, there was a mention of desire but that can be very normal in its rightful place and Godawa has this in balance. He has included here a Godly romance that is based on their new found faith in Shang Di (God). I am not sure if the next novel concerns these characters or not, but I would love to see the relationship develop more between these two. I just felt that their relationship was left a bit short at the end of the novel.

Godawa has created a well relatable character in Antiochus. As the main character and protagonist, Godawa places the reader right next to him from the first page. I was attached to this General. I can see that this was because of the opening scene showing the concern that Antiochus expresses towards his King and sets the scenes for secrets from both his and the King’s past. From here, this novel becomes all about these secrets and how they are intertwined with the rest of the plot. Despite all the action, and subplots, spiritual elements, warfare, the reader never loses sight of Antiochus, he is centre stage even when he is not included in the scene at the time.

I loved the spiritual elements that Godawa has developed. He ties in very well those elements from the bible relating to the Nephilim, the Tower of Babel, and how this has created the mythology of the gods of every culture, in this tale it is of a demonic entity called The Dragon, known in Ch’in culture as Yu Huang, or the Jade Emperor, while Antiochus sees parallels from this to his own culture. I loved how Godawa showed the power of Shang Di and how this was the final piece in the attainment of Antiochus’ faith and of Mei Li and those of the rebels. Very nice example of redemptive fiction here.

I am very pleased with this novel being my introduction to Godawa’s novels and I look immensely forward to reading the series Chronicles Of The Nephilim as well as the ones to follow in The Chronicles of the Watchers.