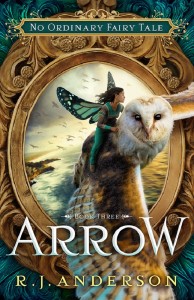 Excellent entertainment with a smidgeon of Truth

It’s actually an urban fantasy of sorts, taking place in England. As an Anglophile, I enjoyed that. We have fairies and magic, inter-racial romance, a power-hungry Queen attempting to throttle the Truth, violence, nastiness, and genuine love. What more could I ask for?

The characters are well-developed, though coming in on this third book was a bit of a stretch at the start. But this book stands on its own. The world-building was probably covered more completely in the first two books, so there was assumed knowledge of which I hadn’t a clue. But for me, it just helped the suspense.

There is a bit of religious Christianity hovering around the edges. Evilly, it’s basically one-star. There’s no true evil enemy here, other than the horror of sin in the human/fairy heart. So, it’s light and clean—for all the nastiness produced by the rapacious Queen.

From a book production point of view, this is bare bones. That surprised me a bit, being from a small tradepub like Enclave. They gave me a copy to review, so it is probably not the final version.

So, given that it’s a tradepub book, it was surprisingly good. Most of the bigger houses have lost almost all contact with Christianity. This one is tenuous, but definitely there—mostly in a worldview sense.