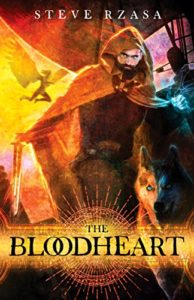 The Bloodheart is a supposedly Christian fantasy by an excellent writer who pulled the punches, really badly. Sky ships nasty villains in a bit of entertaining fluff tells it all. While I enjoyed the authorial dexterity, there is nothing here but entertainment. The world is masterfully built. The framework includes elements which could have been used powerfully…but they weren’t.

The characters were well done, but there’s too much violence and death. I found the tale dark and almost depressing. It’s a big reason for the three-star rating.

Actually, you can see I gave it a 2.5 star rating, even though the more detailed rating system below averages 3.3 star, or something like that.

The 2.5 star overall is due to the fact that I can’t in good conscience even give it a Christian fiction award. I know some will argue—probably vehemently. But, the tale successfully avoids the stone over which people stumble. Jesus is not even hinted at. Spiritually, the story’s a mess. I read some vague religious hints, but they went nowhere. I do expect better than that out of a former Enclave author. Of course, Enclave has gone tradepub—so I can’t expect too much