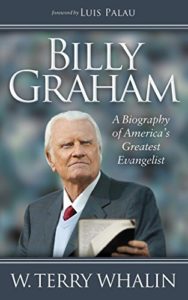 Terry wrote me and gave me a chance to read and review, Billy Graham, A Biography Of America’s Greatest Evangelist. This Billy Graham biography details the chronological events in Billy’s life. We get to see how God was able to use him so well.

While we can nitpick some of the things he did, there’s no question that Billy knew who was in charge of his ministry. The descriptions of the anointing God poured out on Him, as he reached the end of his physical strength, caused him to realize clearly that it wasn’t him, but Jesus running the show.

It’s a very quick read, and the book is disappointingly short. Being traditionally published, the pricing seems outrageous. But, if you can, you’ll enjoy the read. There are some good insights. For example, the ’54 London Crusade lasted three months. Here’s a brief quote about the adventure:

“During this marathon of meetings, Billy had to prepare new messages continuously. Of the seventy-two addresses that he preached in the evenings, at least fifty were prepared on the day they were delivered. Early in the morning and late at night, the evangelist studied and wrote his outline; then he dictated the message, and his assistant typed up the notes. Often he received the final draft just before he stepped into the pulpit. He felt the presence and power of the Holy Spirit in preparing those talks, and when he stood up, he increasingly felt a greater power from the Lord, which never failed to refresh him.”

Immediately after the London work, Billy went on a European tour with a different crusade every day. In the midst of this, in Germany, one night Billy called for help. They found him writhing in pain on the floor in the bathroom of his hotel room.

“The doctor’s X-rays showed a kidney stone, and they insisted Billy enter the hospital for a complete physical. However, the next meeting on the schedule was the largest one planned; it would be held in Berlin’s Olympic Stadium where a decade earlier, Adolf Hitler had inflamed the minds and hearts of his followers. Billy said, “I’m determined to preach in Berlin, even if they have to carry me out on a stretcher.”

Billy ended up preaching with no pain meds to keep his mind clear. He was wondering what the Lord was doing in all this. In a discussion with one of his friends he realized,

“As the men talked, it occurred to Billy that God was humbling him and increasing his dependence on the Lord. God alone would receive glory. The dangers of depending on his natural strength were very real. He read from the prophet Isaiah, “For mine own sake, even for mine own sake, will I do it…and I will not give my glory unto another”
(Isaiah 48:11 KJV).”

It’s always a joy to see how the Lord will use someone who gives it all over to Him. BIlly is such a man.