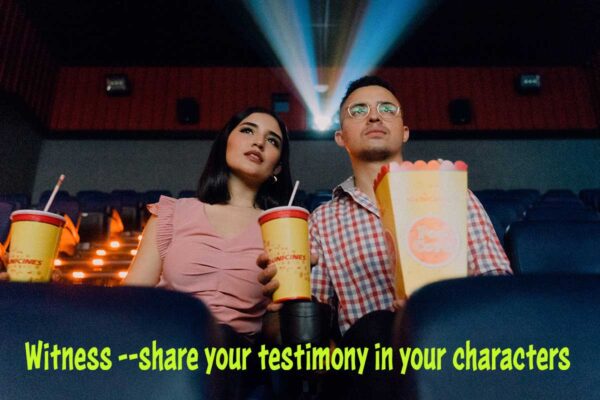 Please, drop the insidious experiences — before the nominal and non-believers lose their chance to meet the Lord. I got into it with a couple guys in one of the groups I admin. I can’t seem to explain that we don’t have time for that any more.

One of them said “we’re discussing fiction rather than theology so that doesn’t surprise me.” No, it’s a group about Christian fiction, so theology is very important. I don’t care about Mormon fiction, and I certainly don’t care about the normal heathen fiction. Another said something like, I don’t know about Christian fantasy but I strong recommend… and he listed off some purely heathen titles. We really can’t be doing that.

I have a ton of books like that I could mention. I grew up reading sci-fi and fantasy during what I see as the Golden Age of the genre. I devoured anything by Asimov, Heinlein, Anne McCaffrey, Ursula McGuinn,  Tolkien, C.S. Lewis, Poul Anderson, Fritz Leiber, and many more. Many hundreds of them. I especially loved books with telepathy, telekinesis, teleportation, and the like.

Heinlein’s Stranger in a Strange Land  came out the year I graduated from high school, and a good argument could be made that it was a major influence on those of us who became hippies in the late sixties.

I learned to drop the insidious experiences

What I learned in those worlds was a major problem, when I was transformed by meeting Jesus in 1974. I went through a period where I was going to be a Christian Dungeon Master, but the Holy Spirit said, “No!”

I had been heavily into the occult, but that was actually helpful in my deliverance ministry. What a joy it was to learn how to deal with demons and evil spirits! They had no resistance to a spirit-filled believer — and still don’t.

The worlds of fantasy and science fiction were much more insidious. I can understand why there are now more people who believe in UFOs and aliens than there are who believe Jesus rose from the dead. I can see how the perversion movement took hold. I understand how easy it is to sell entertained people on how helpful child sacrifice is. Remember, the globalists consider it a useful device for population control. The demonic find it to be a wonderful source of power, as a sacrifice in their rites. The world has gotten really sick.

And since they did not see fit to acknowledge God, God gave them over to a debased mind, to do those things which are not proper. They were filled with all unrighteousness, sexual immorality, wickedness, covetousness, maliciousness; full of envy, murder, strife, deceit. They are gossips, slanderers, God-haters, insolent, proud, boastful, inventors of evil things, and disobedient toward parents, without understanding, covenant breakers, without natural affection, calloused, and unmerciful, who know the righteous requirement of God, that those who commit such things are worthy of death. They not only do them, but also give hearty approval to those who practice them.

But the pull toward entertainment is still strong for all of us, at times. Entertainment definition:  an activity that is diverting and that holds the attention. Diversion definition: a deflection from the goal, a digression into irrelevant details. Basically, a waste of time covers both well.

But how do we deal with Jesus’ imminent coming to pick us up?

Imminent means: close in time; about to occur. I believe it will happen in minutes, hours, days, weeks, months, or possibly a few years. I’ve been teaching prophecy for nearly fifty years. I’ve been studying it a lot recently. The serious prophecy scholars are coming into agreement— it’s that obvious. Check out Perry Stone, Amir Tsarfati, and many more.

Of course, huge portions of the church know nothing about any of this. Many are the scoffers Peter prophesied. But most are simply ignorant and oblivious. I heard figures like 90% are amillennialists, who believe there won’t be a millennium, or that we’re living in it now.

When our Messiah comes to take us with Him for the Wedding, we will find ourself with him instantly. The Bride will be complete. Scripture says a third of the Jews will repent and be saved, calling on Yeshua, and watching Him break through to the glorious dawning of the new age of the Millennium.

It’s true that some will turn to Jesus before they die during the Great Tribulation. But, most people will not. Billions of people will die.

Now that the Holy Spirit has put all of that into its proper place in my life, I find the info useful. But I’m not that good a writer, and my following is small. I’m praying that more of you will start seriously working on powerful spiritual fiction. We’re running out of time.

Preaching will not do it. You need your characters to bear witness to their radically transformed life. You’ll love it. I can’t put into words what a joy it is to write fiction in this manner. Countless times, I end up in worship with tears running down my face. I don’t preach, I rarely quote scripture. My characters simply share how they’ve changed and how good it is. The wonderful, awesome nature of the Lord is revealed for the reader without any push. He is simply revealed— and you know how wonderful He’s been in your life. Just have your characters share some of the little things the Lord’s done for you. I’m convinced the little loving things have more power today than the amazing wonders. But, by all means, share the miracles also.

Please pray and ask what the Lord would have you do.