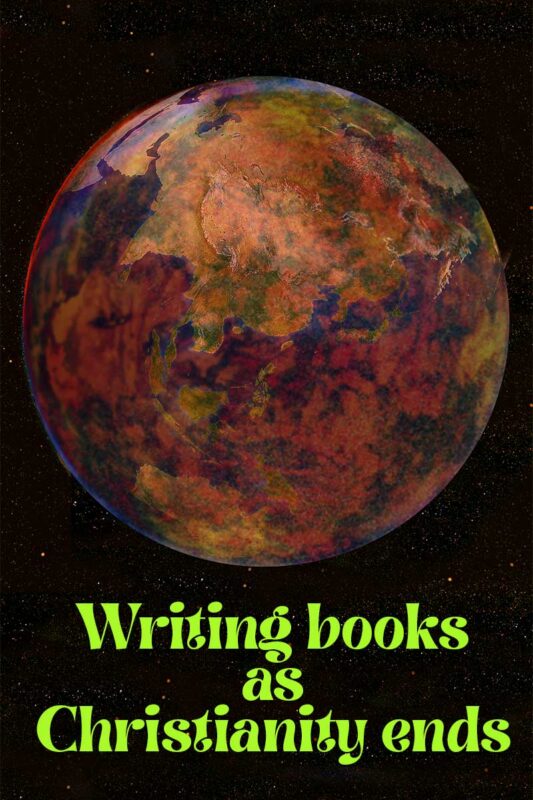 Writing books as Christianity ends needs to be considered as we work our way through the birth pangs, meaning the Lord’s return for His bride is imminent. How do you handle that anticipated event?

More importantly, what has the Lord told you to do about that? The focus of the church now is about the completion of the Bride. The Groom has been at the side of the Father, preparing a place for us. All Jesus is waiting for is the Father to tell Him that it’s time to go pick up His Bride.

Jesus has told me that I’m to encourage all the Christian writers I know to write fiction [maybe non-fiction] to help with this final harvest of the church. It’s a wonderful time to be alive. This is better than living in the time of the Acts of the Apostles. It’s time to get our big boy or big girl pants on and get to work.

The only way you can be sure you’re going with the Christians, is to be born from above [see John 3] and know Jesus [have a personal relationship with Him]. If you haven’t done that yet, it’s time to get that done. You’re running out of time. Here’s how to do that if you don’t know.

Once we’re out of here, the Restrainer is gone. Then the world and the Lord deal with finishing the prophesied events of the salvation of the Jews. Along the way, the World has to deal with the wrath of the Lamb, and the wrath of the Father. Sin and the creep have decimated the earth. Mankind has followed along demanding the right to satisfy the desires of their flesh.

You can read all about it in Isaiah 24. It’s not going to be pretty.

The earth mourns and withers, the world languishes and withers; the heavens languish together with the earth. The earth lies polluted under its inhabitants; for they have transgressed the laws, violated the statutes, broken the everlasting covenant. Therefore a curse devours the earth, and its inhabitants suffer for their guilt; therefore the inhabitants of the earth are scorched, and few men are left. [Isaiah 24: 1-6 RSV}

Terror, and the pit, and the snare are upon you, O inhabitant of the earth! He who flees at the sound of the terror shall fall into the pit; and he who climbs out of the pit shall be caught in the snare. For the windows of heaven are opened, and the foundations of the earth tremble. The earth is utterly broken, the earth is rent asunder, the earth is violently shaken. The earth staggers like a drunken man, it sways like a hut; its transgression lies heavy upon it, and it falls, and will not rise again. [Isaiah 24: 17-20 RSV]

The days when the towers fall

I’ve always been intrigued by that verse in Isaiah where we see the phrase “when the towers fall”. I guess Manhattan and Dubai are in trouble. The good news is that the Lord has promised in many places that the Bride will avoid all of this. “For God did not appoint us to wrath, but to obtain salvation through our Lord Jesus Christ,” [1 Thessalonians 5: 9 NKJV] The parallel verses make it clear that we will be saved from, not through, the Wrath of God. Jesus told us in Rev. 3: 10 that He will keep us from the hour of trial coming upon the whole earth. And there are many more.

But after Christianity ends, we will be in Heaven at the Marriage supper of the Lamb as prophesied in Rev. 19. The entire focus of the world goes back to God’s chosen people in Jerusalem. When Jesus comes back to finish it, we’ll be riding with Him watching it all happen. The earth will be returned to the way it was in Eden.

The church seems surprised that the birth pangs are so rough. Who would have thought that the entire world would be shut down from a plague? No one guessed that America would turn socialist. Who could imagine that we’d be dealing with people who actually believe there are dozens of different genders? It seems obvious that God has left us to our own devices resulting in a depraved mind for the entire country.

And just as they did not see fit to acknowledge God, God gave them up to a depraved mind, to do those things that are not proper, people having been filled with all unrighteousness, wickedness, greed, and evil; full of envy, murder, strife, deceit, and malice; they are gossips, slanderers, haters of God, insolent, arrogant, boastful, inventors of evil, disobedient to parents, without understanding, untrustworthy, unfeeling, and unmerciful; and although they know the ordinance of God, that those who practice such things are worthy of death, they not only do the same, but also approve of those who practice them. [Romans 1: 28-32 NASB]

My only surprise is that Christians are surprised. The entire church is suffering from a lack of knowledge about prophetic realities. It’s time to grow up. I wrote a major post a couple weeks ago on getting off the political and on with the work at hand—saving all that are possible to complete the Bride. What an exciting time to be alive. You may lead the last one to the Lord to complete the Bride, and we’ll be out of here.

So, what kind of fiction can we write for the end of the church?

What a glorious challenge! Writing books as Christianity ends gives us a real time of opportunity. But we know that the Cancel Culture is out in force. So what? Jesus and the Holy Spirit is certainly up to that and will back you up in power—if you ask Him for the anointing.

I assume you’ll be writing urban fantasy, contemporary fiction, something taking place during this day and time. There are certainly a lot of trials and tribulations to use. People are panic-stricken—even in the church. Strangely, I don’t think that apocalyptic tales will do it. The ones I read are so ignorant prophetically that they’re embarrassing.

If we take a generation (and Jesus told us that this generation would not pass away. Which generation? Probably the one who has seen Israel born as a nation again. That’s people my age and less. I’ll hit 80 in 2024.), that’s from seventy to eighty years. So, we’ll probably be out of here before 2030. We’ll almost certainly have the Gog/Magog war to deal with. The decline of America is certain. Europe will be in trouble. Nation states, in general, may well be mostly gone. That’s what’s behind the Open Borders policies. Remember the whole world has to be in enough trouble so that they’ll jump at the chance to serve and worship the antichrist as soon as the Restrainer is gone. The Gog/Magog conflict will probably wipe out the Muslims—but that’s just a guess. The possibilities are really intriguing.

So, talk to the Lord. Ask Jesus what He wants you to do. Then do it! I’ll help any way I can.