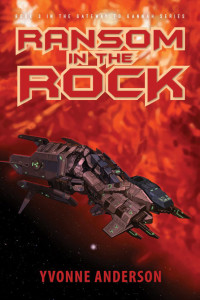 I’m only showing the cover from book #3, because I {and Yvonne agrees} do not consider the covers of the first two books to be professional. They were done outside of her control by the publisher.

But you need to understand what I mean when I say that. I’m not saying that the series is on the level of LOTR or Dune or The Foundation series or the EarthSea chronicles. It is true that the Gateway to Gannah series is a very good story, well written, intriguing plot, excellent character development, and all of that. I am eagerly awaiting the release of book #4 in the series this Fall.

However, my emphasis is on Christian in that statement. I do not rate books by how well they are written. I rate them by how much Truth they tell. By truth, I mean does it show people’s lives being tranformed when they come into a relationship with Jesus or the person who is the Messiah in the book whatever his name. It wouldn’t be Truth, for example, if the Messiah was female, or sinful, or only a human and not God.

The Story in the Stars is exceptional. Words on the Wind is more standard survivalist fare, but still very good. Ransom in the Rock is the best of the three.

Why are they so good! They offer a good look at what a complete society culturally committed to Jesus would look like. Sin rarely happens, for example, because it’s simply not a conceivable option to people raised in this society. Marriage is a strongly Biblical model [which might offend some]. Righteousness is expected and usually revealed in the lives of the Gannahan people. The Messiah is called Yasha by Gannahans, but Jesus by Earthers. They are the same person we know and love.

Most importantly, Yasha is active in their lives in a very realistic manner.  I have experienced what these character live through in my own life. So, I can verify the reality of this level of communication. It is true that Yasha is more available than He normally is in America in the new millennium. But Yvonne presents Yasha in a very real way which embodies truth. I wish we got a meah like what is found in Gannahans when we are born again from above. It’s not a Pentecostal, Full Gospel, or spirit-filled book. But it is far beyond most evangelical living. AS a Charismatic from the 1970s, I found it a real joy.

What a great book! While I don’t find it as inspiring as Guy Stanton’s books, that is only because the principles are two strong women and I’m a man. They are done wonderfully well. But Guy’s books speak to me directly as a Christian male, as he always has both a male and a female lead.

The Gateway to Gannah series is exceptional culturally

The main strength of Ms. Anderson’s books is in how saving faith and the Messiah of God works within a culture when it is the guiding force of that culture. The books are never preachy. But there is a lot of excellent reasoning for the whys of how society works in the Lord. It strongly touches my theocratic political beliefs. [Yes, I am neither Democrat nor Republican. Even Libertarian doesn’t quite do it. I want the righteous King who is promised to us.]

If you are a believer, or if you want to find out how God could transform society and civilization if we let Him, you need to read these books.

The covers of the first two books