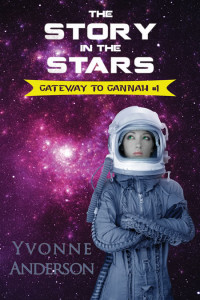 In my opinion, this is probably the best Christian science fiction I have ever read. Is it the most compelling science fiction in general? No. Is it the best written? Certainly, many would say no. So, why do I think it is the best? Conceptually. I don’t read to be impressed by the writing [in fact I rarely notice that unless it is too pompous or stylized]. I don’t read to be amazed at the world construction ability of a Larry Niven in Ringworld. I read to be grabbed by new concepts, clearer expressions of truth, that glowing feeling which only comes when you’re built up in the spirit. On those grounds, The Story In the Stars ranks way up the list for me.

Yvonne Anderson’s tale touches the heart of God in a unique way. Much like Ginny Jaques’ tale of life in a possible post-second-coming millenium did with Zinovy’s Journey, this book gives us a glimpse of a society ruled by Jesus as it is supposed to be. Is it flawless? Of course not. “Now we see in a mirror darkly…” But I can honestly say I don’t know where any potential inaccuracies may be. The story “rang true” to me. It gave me a hunger for a true godly kingdom, or heaven, which is hard to express.

This is science fiction on the edge of fantasy

The story is space opera on one level. On another it is epic fantasy. It is a princess’ coming of age under immense duress. It takes place in a universe of multiple races, multiple worlds, dealing with the interaction of very diverse cultures in a manner which is simply edifying. I don’t want to spoil anything, so here is Ms. Anderson’s description from her website of this particular story [book #1]:

“The plague ravages the planet Gannah. By the time help arrives, only one survivor  – Dassa – remains. Pik, the Karkar doctor assigned to her case, hates everything Gannahan and wishes every last one of its people had perished [David: his world had originally produced the plague many years before which eventually killed the planet].

Dassa carves out a new life after her world is destroyed. She fights pirates, offends her new acquaintances, and hires an illegal pilot and ship to take her back to Gannah, with the grumbling Pik a continual irritant. On the dead planet they battle vicious animals, suffer food poisoning and survive a plane crash in order to return to Pik’s people the priceless treasure Dassa’s ancestors stole centuries before. Throughout their adventures, Dassa learns about patience and unconditional love, while Pik discovers a treasure that can never be lost.” From the Y’s Words website

As you can see, Anderson’s description doesn’t even mention the true worth of the book.

It is fascinating to speculate about this type of society

What would it be like to be in direct line to the Garden with no knowledge of life without constant, open and clear communication with our Messiah? What would that culture look like? Yvonne gives us a good solid glimpse of that which rings true to me. How can you do much better than that?

If you like this book as much as I do, it needs your support

As you can imagine, fiction promoting spiritual truth has the entire world system fighting it. So, if you like it review it, and tell your friends.

Yes, I know, the cover’s not much and very inaccurate in it’s depiction of Dassa [IMHO]. It should tell you something, knowing me, that even for the ridiculous price of $9.99, I’m saving my pennies to buy book #2: Words In the Wind.