This is book two of the Song of Searle series. The blurb is as follows:

Conor and Aine have barely escaped Seare with their lives. Conor knows he must return to find the harp that could end the Red Druid’s reign of terror, but in the midst of their escape, he and Aine are torn apart once more. Surrounded by despair and thrown into as much danger as they left behind, Conor and Aine must cling to the whispers of Comdiu’s plans for them and the homeland that depends on their survival. But at what cost? Will they learn to depend on Comdiu completely? Or will they give up hope? 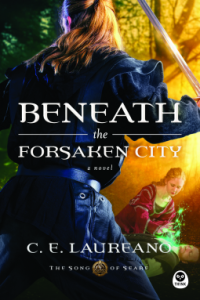 I never read book one, The Oath of Brotherhood (though it sounds very intriguing). But it was no real hinderance. Actually, at the price of book one, I’ll probably never read it. $10 for a Kindle book is a bit extreme. This does make the print book more attractive, but I don’t read print any more. However, Tyndale (NavPress) gave me an Advanced Review Copy of the print book in PDF form in return for an honest review, and I’m glad for the opportunity. It was a very good read.

The characters are strong and believable. The main hero and heroine seem to be regularly almost overcome by hormones and emotional longings, but then it is YA. One of the heroine’s “gifts” is an overwhelming attractiveness to any male who sees her—which is irritating…certainly not a spiritual gift. But in general, the good guys (male and female) are strong, honorable, of good character, and so on. The bad guys tend to be dupes of the demons, or self-centered people only interested in power and wealth. Several of the characters are simply non-believers pushed around by their flesh. But in this day and age, that’s believable.

This is really an excellent book

This is epic fantasy the way I like it, almost—medieval technology and culture with gifted, spiritually strong warriors fighting an evil, occultic foe. The culture is intriguing and well described except there are few details about the economical/geographical side (agriculture, manufacturing, crafts, trade) of things.

But mainly, it has been a long time since I read a traditionally published book with good spiritual content. Of course there are problems. For example, I vaguely remember the mention of the name of someone I believe is the son of God/savior, but I may be remembering another book. He’s certainly not part of this one in any meaningful way. But Comdiu is recognizable as the Abba I love. So, it’s a mixed bag but not Christian (no savior, no christ, not christian by definition).

The problems come in with Comdiu’s gifts. Hearing from Him is presented as a very direct, a recognizable voice in your head giving powerful, clear advice and direction. Yet, the ability to hear God’s voice is a gift spoken of as magic. It is not available to the general populace—at least not by the end of this book. It’s attached to leadership. The book has an Old Testament level of content combined with an accessible God of love, humor, and compassion. But then the good guys protect their city by setting wards—which is normally an occult practice.

All the gifts have these strange problems. They are given to a person and that person exercises them at his or her discretion. These gifts can be relied upon, most of the time. But the Lord I serve gives gifts of power which are not predictable even though very real (and even more powerful than what is shown in this world with in the book). They are not permanent gifts of magical talents and abilities, rather they are powerful aid given as needed for service.

Plus, gifts in this book tend to look and feel more like normal fantasy fare: telepathy (one-way only, listening), scrying (distance viewing, but only by the enemy spirits and subject to the twists caused by the lying enemy), possession (only by the enemy), healing (very quickly wounds disappear and much more—healing restoration is available if even a spark of life is left).

However, the general spiritual feel is that this is all recognizable spiritual truth—and much of it is. God is presented well and favorably. The enemy is an unexplained evil spirit who possesses a person (and gets a new body to use as the old one grows old and/or useless) called the Druid.

But it is exciting drama played on a rich, thoroughly developed stage. It is spiritually strange to the place where teens might need help with discernment. I suggest parents read it first so they can intelligently discuss the book with their children. But, it’s clean CBA stuff without offense.