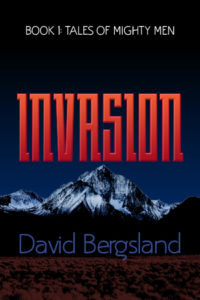 First Release Tales of Mighty Men with Book 1, Invasion released today, April 20, 2017. Here you meet Deborah “Stones” Jackson for the first time as Mexico prepares to invade the southwestern states of the USA.

Patron “Juan Dominguez from Chihuahua, the capital city of the state of Chihuahua, might be sending soldiers up into New Mexico in those trucks. He was the leader of a large drug cartel until he got involved in Chihuahuan politics. At one time he was listed with the fifty richest people in the world.
“Recently he has completely changed focus. He has become the de facto ruler of Northern Mexico appointing the officials & controlling the elections. Most of the political leadership of the Chihuahuan state are loyal to him. He’s had his devious little fingers in many pies recently. It’s almost impossible to keep up with his actions and connections. The Chinese have invested an unbelievable amount of money in the state of Chihuahua, building several very large manufacturing plants to finish off Chinese products for final import into the United States.” Excerpt From: David Bergsland. “Invasion.”

But this is just the tip of berg when describing the traitors, countries, and all the rest who have been preparing for years to get rich and reestablish Aztlan as a real country. The goal is the reestablishment of the Aztec empire—a legend for years among many of the pepople living in the southwest over the past 400+ years.

But don’t go crazy! Amazon has not bought into it yet and you’ll still pay $0.99 there or $11.95 for the print version. Click on links in the next paragraph and enter them into the lower price query on the amazon page: http://amzn.to/2oZjvLo

But it’s free at iBooks, Nook, Kobo, Smashwords if you can use an ePUB. If you need a mobi version for your Kindle, you can buy a copy for free at Gumroad. You get an archive with an ePUB and a MOBI version of Invasion.

Book 2, Evulsion is available for pre-order
to be released on
Cinco de Mayo: May 5, 2017

Book 3, Ejection is available for preorder. To be released July 4, 2017

General Marti has similar issues as he aligns his new-found faith with his plans for the redemption of his error. Fort Bliss will be a tough fight against Santiana. The rest of the plans are much more fluid as Senator Aragón deals with the reality of leadership, under God. God’s plans are amazing, as usual.