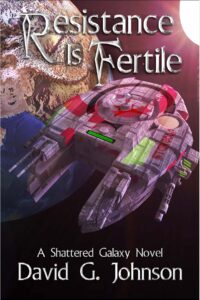 Resistance is Fertile latest Shattered Galaxy offering by David G. Johnson is a joy to read. The characters are marvelous. The story is fun. The world building is complex and entertaining.

David is an excellent writer. This one continues off Star Wolf, book one in the series.  Both tales are solid sci-fi in the normal world of today, culturally. The aliens are entertaining constructs and realistically developed.

This is a character-driven tale, and the characters are great fun. It’s an entertaining read, and I found it hard to put it down once I started reading.

Resistance is Fertile is the latest Shattered Galaxy offering by David G. Johnson

I must admit, I’m always surprised that David can write a world with so little spiritual reality. For those of you familiar with my spiritual rating system, this series barely makes level three and the spiritual level is level two at most. He keeps spiritual truth hidden enough so that a non-believer will not be offended—theoretically. Of course, any mention of Truth will trigger violent negative reactions in any heathen.

If we look at this rationally, hiding the truth so deeply should make for better sales. But, as I just mentioned, for non-believers even the hint of truth will set them off. It’s like making a favorable comment on Israel to a jihadi.

The good news is, based on Mr. Johnson’s previous books like the Chadash Chronicles, there is a reasonably good chance that book three will make it to a redemptive level. Be that as it may, this is an enjoyable, entertaining read for anyone [even for people who normally require more Truth, like me].

On another level, for gritty sci-fi, this book comes close to being a clean read. So, you can give this to your children without fear that this will corrupt them. It’s a good read.