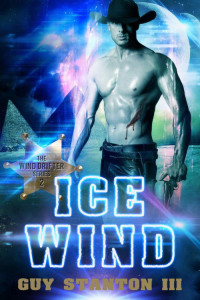 I’m at a loss for words. My only quibble is that it’s yet another of those #%$&*( )@#$ novellas. I have literally run out of superlatives for Guy’s books.

This is Christian, action/adventure, science fiction, western, spiritual warfare, romance at its unique best. Guy says that this series is a result of the life-long love of Louis L’amour. I had no idea that Louis had written science fiction, but evidently that’s true. This second novella in Guy’s new series adds another wonderful intense Biblical romance to the mix. Fire Wind, book 1, is the only one of Guy’s books without the wonderful mating of a strong man and woman of God—though like most of us, they were heathen sinners before the Lord got a hold of them. These are flawed, heathen sinners redeemed and transformed by the Lord.

This is simply because the Savior is not mentioned, as I recall. But the spiritual truths you live through the characters are real and edifying. Taran is a wonderful hero. As always, he’s strong, handsome, likable, inspiring, of impeccable character, dangerously direct—you know all the wonderful stuff we hope to find in a hero. The book is gritty, but never gratuitous. He lets the reader fill in the nasty or delightful details in his or her mind.

I like to call Guy the Christian Clive Cussler, but he’s much more than that. He’s a unique, fresh, inspiring teller of tales the likes of which I always hope to find. You’ll love his books. Since 2012 he’s released four major series and a stand alone novel. If I am remembering right, there are 16 books released with several more promised during 2015.