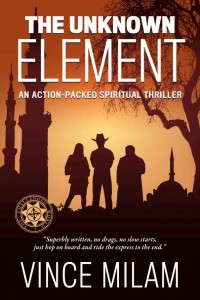 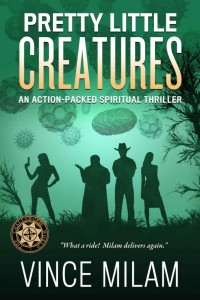 These two books are a bit outside the scope of this blog, being action/adventure, mystery thrillers. However, the story lines are directly about spiritual warfare. But this is not your modern, over the top, Hollywood battle. This is action/adventure on a spiritual level.

Yet they are clearly Christian. The characters grow in faith and that is one of the major threads of both books. The three hero/heroines are a delight: a typical, 21st century sheriff suddenly confronted with the reality of spiritual evil; a computer geek supreme, completely worldly—confronted with the same; and a Vatican exorcist who acts more like a spiritual Chuck Norris, a la Friar Tuck.

The story, characters, interactions, and the world-building are all first rate. I felt like I was reading one of the old heathen political/military technothrillers: Dale Brown, Clancy, Thor, and so on. But what would be the word to use for spiritual thrillers in that context? It was fun to read a book, which gave me the same escape I used to find with the heathen thrillers, that had a genuine spiritual edge.

Spiritually, I have to give it 3 stars, but it’s real

This is mainline-level spirituality with a twist. It’s real. These are complex, likable, intriguing characters forced to live in a spiritual world which they had no idea existed. The idea of a need for faith is like a bucket of cold water to sheriff and the geek.

It was like old home week for me. My father was an Episcopalian exorcist when Jesus touched me in 1974. He was my main mentor during the early years of my walk in the Lord. I’ve worked quite a bit in deliverance, and it was one of the focuses of my dad’s ministry. This book had little of the reality of spiritual warfare in the real world. But in its own way, it is much more realistic than what we see in Marc Romang‘s books, for example.

CBA beware, this is edgy stuff

It reads like a worldly action/adventure book. There’s not really any horrible language, gratuitous sex, or anything like that. But: there’s a lot of violence, crudity, innuendo, characters on the good guy side who are completely heathen, and a level of reality which will make many looking for a clean read quite uneasy. Reality is like that, as we all know.

My recommendation is to tough it out, and enjoy two good books. If you are giving them to your kids, make sure you read’em first. But it could open them to a level of spiritual good and evil which might be very powerful.

Vince gave me copies to review, though I think I started by getting The Unknown Element for free.