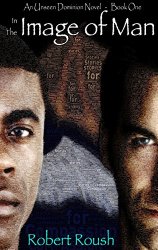 In The Image of Man (Unseen Dominion, Book 1)

When Officer Chris Davis, of Arrow Springs, Missouri, rescues a young woman from a mysterious attacker, he steps into the center of a spiritual showdown. Following his heart, and a trace of circumstantial evidence, he embarks on a collision course with a government research facility and an unseen foe.

One year before Dolly the Sheep, three humans were cloned in a small town in Missouri.

This novel is predominantly about spiritual warfare between angels, fallen angels and humans. If anyone has read Frank Peretti’s This Present Darkness and Piercing The Darkness, they will understand what this novel is about and how it is structured. This novel is up there with Peretti and all the other authors who have successfully gone down this path like Peretti.

I must say though that what I found refreshing about this novel is that Roush has added a different motive to the fallen angels quest for takeover. In other novels of this genre, it has simply been to usher in their agenda of control, deception and rule, but in this novel, Roush has escalated their agenda. The fallen angels do not just want to control by deception and spiritual bondage by leading Christian and non-Christian astray but by cloning the human race, effectively making them almost similar to the Nephilim of Genesis 6: 4. In reality, Satan has made it his aim to counterfeit everything of God’s creation in order to mock and defile God and His creation and this latest venture in this novel makes the reading more compelling, intriguing, and concerning.

I was impressed with Roush’s premise that God would not give these clones a soul and for obvious reasons, that they are not created by Him, and I love the plot twist that Roush gives to Mael, evil fallen angel, to further mock and counterfeit God and his creation. This theme of whether a clone has a soul has some interesting ethics for mankind in reality and has already made it in another story by Terri Main, Parmenter’s Wager: A Short Story, where she explores this from a Biblical/Christian worldview, but with some differences to the origin of clones in this novel.

The spiritual warfare aspects of this novel are well done. Roush is very much an advocate (as all Christians should be) of paying close attention to the spiritual warfare that exists around us that we cannot see, but experience its effects. This novel, like Peretti’s, and all the others in this genre, is based on the biblical verse that instructs,

He, therefore, shows the power of prayer as evidenced by the prayer and bible study practice of the main character, Chris Davis, various church members individually and corporately, and Pastor Thomas, showing him being sensitive to the leading of the Spirit and being spiritually discerning and the power of fasting. I found this to be a great strength to this story and it is an important discipline of a Christian’s behaviour and one to not take lightly. I applaud Roush for including this so strongly in this novel.

I loved the portrayal of Chris, main character, as a strong personality but also as one whose is totally reliant on God for direction and guidance in both his personal life and occupation. Nothing separating the two and this just adds to this character being portrayed as realistic and relatable and one Christian male role model, who is tempted sexually, has his doubts about faith, frustrated in his battle against the politics and deception of his own police force and the government research facility, but seeks repentance and forgiveness for these shortcomings. I love this in a Christian novel, the characters are real, and relatable and show Christians for who they are, real people with a fallen nature but who are works in progress from an ever patient and loving God.

Roush portrays the other main characters with similar failings but who find hope and restoration in God. Sarah battles through sexual abuse by the killers of her parents, betrayal and mistrust of men and human relationships, loses her faith in God and humanity, but finds trust, hope, reconciliation with God through the example of Chris Davis who represents the protective, nurturing, and saviour like quality of Christ, and what Christian men should be like, while they both recognise their strong feelings of attraction for each other; Daryl learns that the only way to forgive himself is to accept the forgiveness of God as he realises his need for God as Saviour, Marilyn also finds that she cannot forgive Daryl until she learns to trust God and accept that she needs to let go of her bitterness and anger.

Through all this characterisation and situations, these are all connected to the spiritual warfare elements and provide for one very cohesive, smooth flowing plot. Sometimes these subplots can derail the main plot and make it very disjointed by not in this novel. Roush is one very good plotter here and this novel reads like it would as if the reader was observing all these events in real life.

Roush has portrayed the angels as you find them in the Bible, as messengers, warriors and guardians. Perhaps the most important part of their portrayal is their obedience to what God has instructed them to do in these three roles. They never act independently of God’s instruction or of their own will or initiative. They may wonder why they cannot act in a certain way according to the what they can see should happen in the circumstance they are in, but they keep themselves in check knowing that God’s intention and outcome for this circumstance may not be evident at the time. I loved the rapport that Roush has developed between them, they are a team, they respect each other, joke with each other, encourage each other and keep each other in check. Their obedience and submission to God and how they treat each other has important lessons for us as Christians in how we are to do the same and our relationship with God.

I really enjoyed this novel better than I thought I would. Roush has quite a talent for writing, for entertaining the reader, educating in spiritual warfare and the power of prayer, and honouring the Bible record of these matters and God himself. I believe that Christian fiction shows more of the heart toward God that an author has as evidenced in how he deals with his subject matter and from this novel, I can see that Roush is one very devoted, committed man with a heart after God’s own, just like David of the Bible.
I look forward immensely to the next instalments of this series.